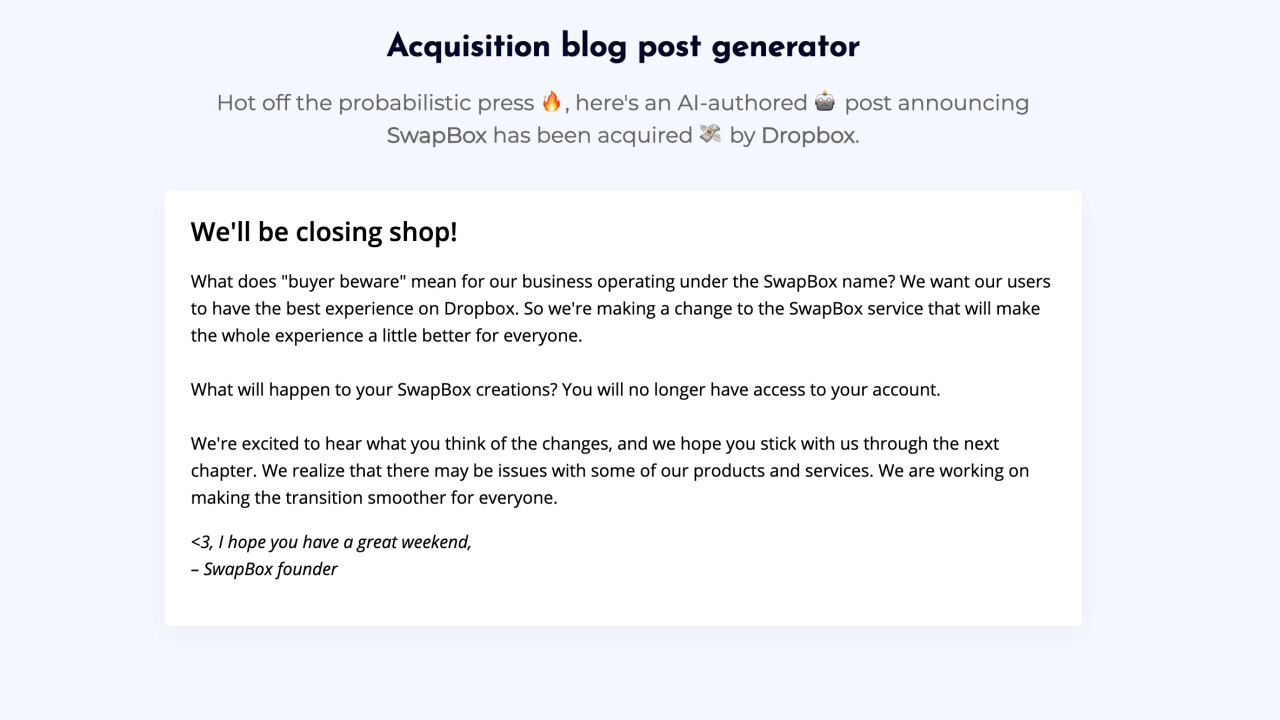 Photo storage startup Loom announced it had been acquired by Dropbox in 2014; it also said it would be shutting down its service a month later. In 2015, Divshot revealed it had been bought out by Google; it also added it would be closing doors two months later. Guess what happened when Meta Mind got acquired by SalesForce in April 2016? It shuttered the same year in June.

You get the idea. When startups break the news they’ve been acquired, there’s also a tendency to announce they’ll be shutting down their services, like three days later. But more than the same fate, these startups also share the same formulaic announcement posts — and this is precisely what this new AI-powered tool is poking fun at.

Meet ThisStartupAcquisitionAnnouncementDoesNotExist — a self-described “acquisition blog post generator” that was fed a diet of over a hundred acquisition posts to learn the art of crafting the perfect startup acquisition announcement. And the result is just… incredible.

Here are a couple of examples: 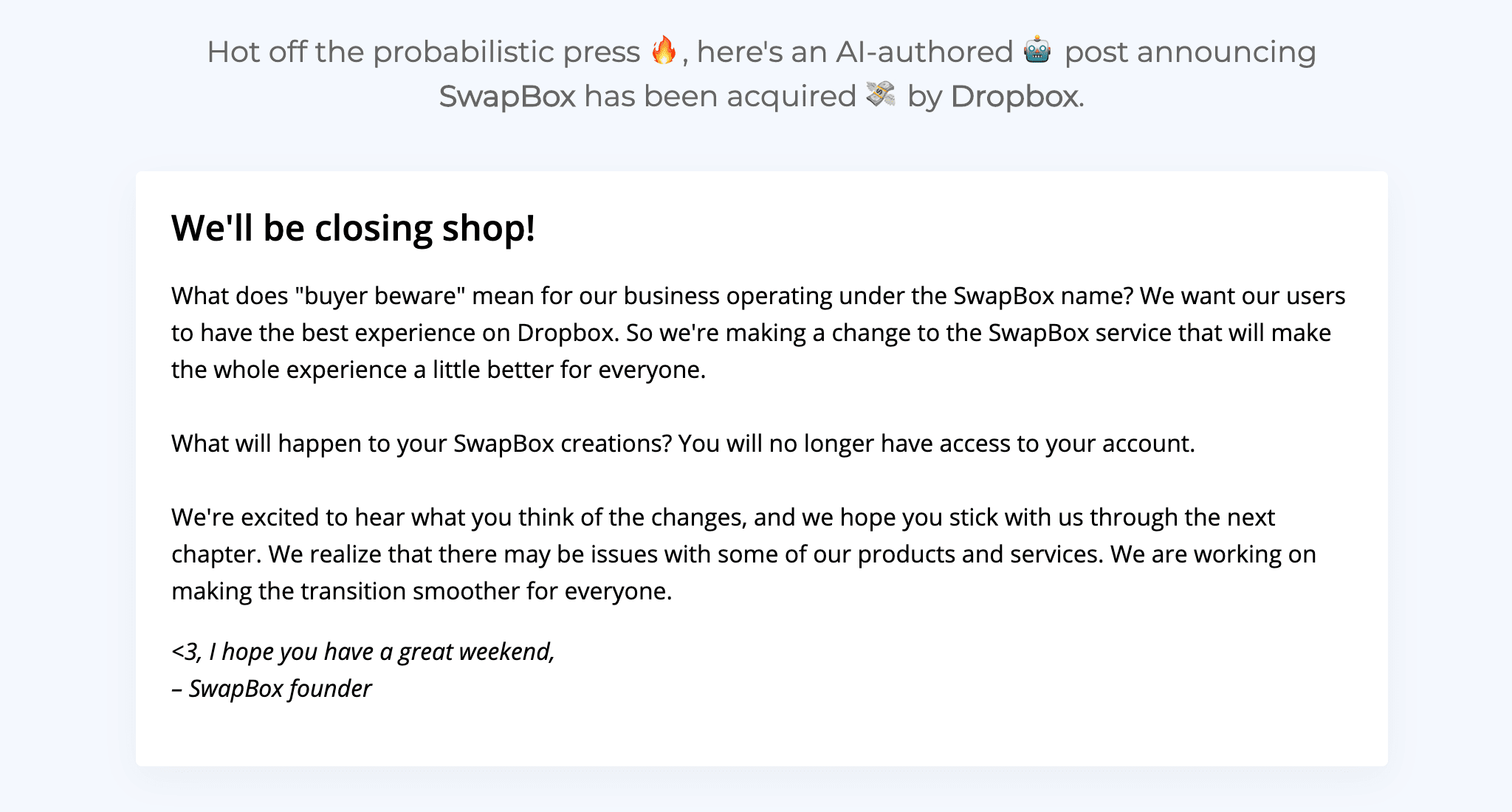 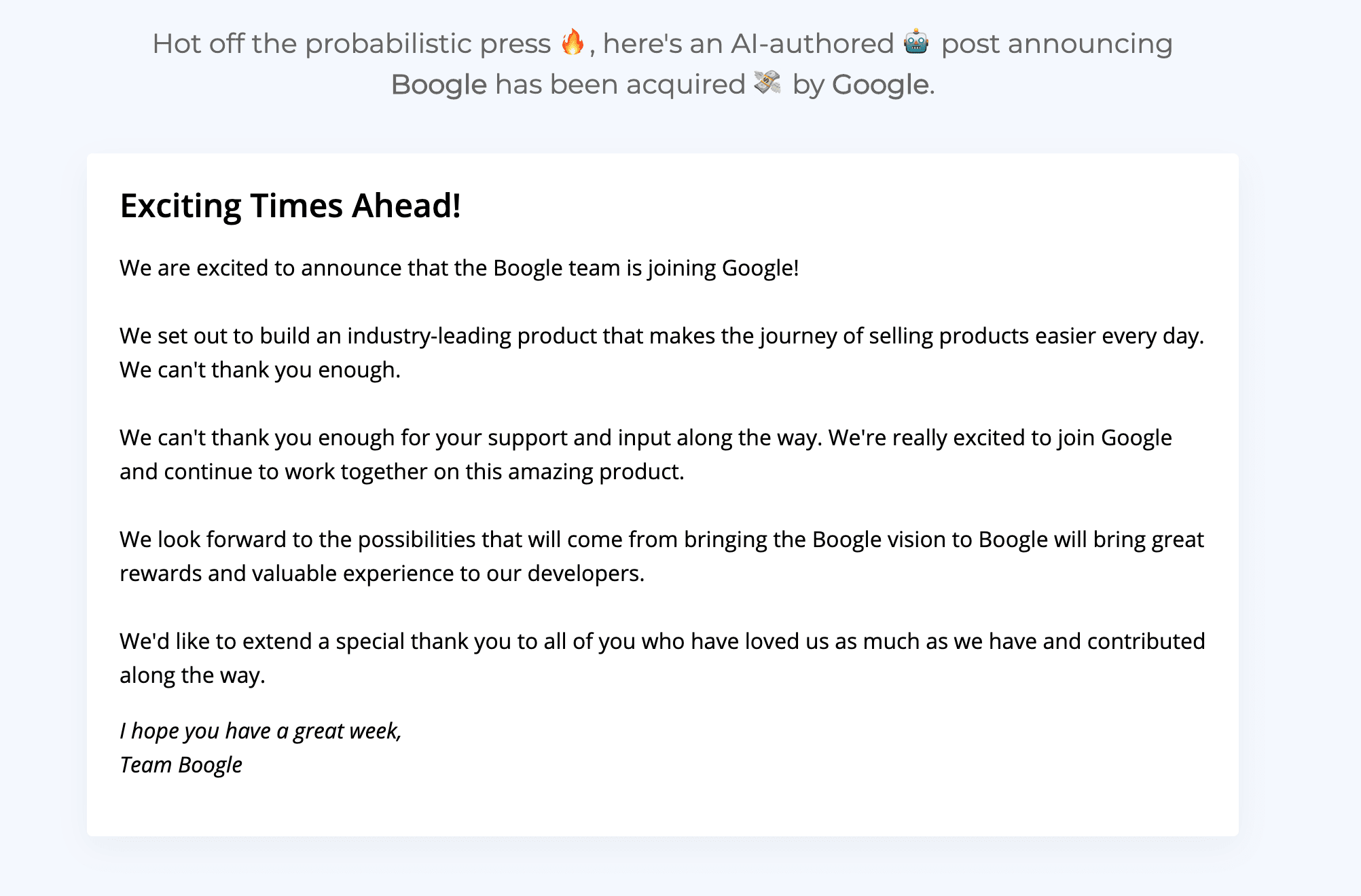 The Acquisition Blog Post Generator was inspired by Our Incredible Journey, which collects announcement posts from startups acquired by Big Tech.

“In each post the founders struggle to contain their excitement and express endless gratitude to their users,” creator of the app, Andrew Nisbet, writes. “But, inevitably stuffed into the last paragraph of the blog post is the announcement that the service is being shut down in like a week even though the founders are millionaires now on the back of their users’ loyalty.”

“The tone is totally inappropriate for the message,” he continues. “In fact, the posts are so formulaic and impersonal that they may as well be generated.” So that’s what Nisbet did.

The developer used several AI models — including OpenAI‘s notorious GPT-2 text generator — to build an app that automatically churns out an infinite feed of equally plain and tone-deaf acquisition announcements.

ThisStartupAcquisitionAnnouncementDoesNotExist is not the first app of its kind. The generator fits within a broader trend to use AI to generate realistic replicas of practically anything — like people, cats, Airbnbs, food, and even feet (you should totally look these up too, if you already haven’t).

In the meantime, if your startup has big news to break, go check out ThisStartupAcquisitionAnnouncementDoesNotExist here.