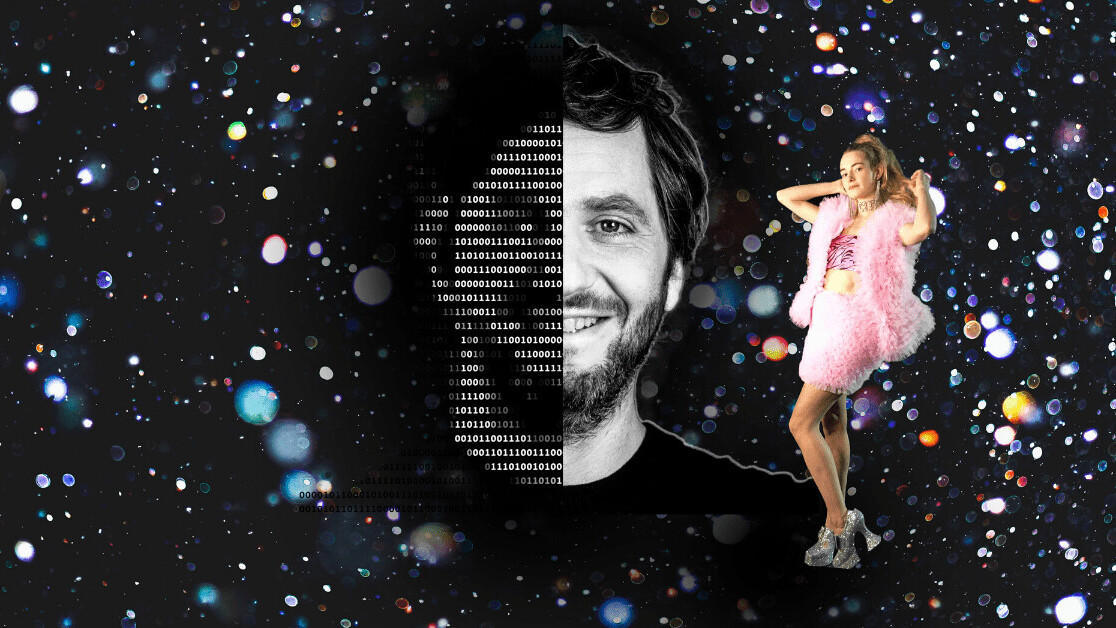 This year, the world’s most prestigious music award show — The Eurovision Song Contest — was set to be more spectacular than ever, as an AI competition was running alongside the traditional extravaganza.

Then the coronavirus arrived.

Eurovision was sadly canceled — but the organizers of the AI song contest bravely chose to go ahead. And TNW bagged an exclusive ticket to the show.

“We have everything here,” promised host Lieven Scheire. “There is glitter, there is a smoke machine, there will be love, peace, and modulations, and I have prepared some overly scripted jokes that probably will not work in this context. Everything for a wonderful Eurovision evening.”

They even had a green room, where the stars mingled backstage.

Just like at Eurovision, the competitors came from some of the continent’s powerhouses: France, Germany, the UK, Belgium, the Netherlands, Sweden, Switzerland, and, er, Australia.

“A friend of mine said, is there a team from Austalia?” quipped Schiere. “Why didn’t they call themselves ‘Good AI mate?'”

Their team had composed their song by training a generative system on a corpus of Eurovision songs to create the melody and the lyrics. It returned pertinent lines like “the power of fire,” “candles of hope,” and “lu-lu la love.”

Uncanny Valley then added an Antipodean twist by blending in audio samples of koalas, kookaburras, and Tasmanian devils. Finally, they recruited a producer and vocalist to bring the song to life, and gave the song an inspirational title: Beautiful the World.

“We think that it’s high time that AI music became as produced and as chart-ready as any piece of music released — and if the lyrical content is slightly nonsensical and the melody is bizarre and confronting and surprising, well, that’s fine,” said Uncanny Valley’s Charlton Hill.

Back in the green room, René Shuman from Dutch challenger COMPUTD was looking resplendent in a banana yellow jacket and Elvis pompadour.

Team COMPUTD created individual pieces of lyrics by training an algorithm on existing songs, and then manually assembled the words, chords, and melodies into a coherent whole.

“The AI system came up with the lyrics ‘I write a song’ — it’s almost self-aware,” he said.

Scheire thought that the work was “a beautiful ballad.” But would the judges agree?

Surely Anna Huang, an AI resident working on generative music models at Google’s Magenta project, would have liked it.

“Every song to me is a hit song,” she claimed.

Huang was joined on the jury panel by Ed Newton-Rex, the founder of AI composer startup Jukedeck, and Vincent Koops, a data scientist at RTL with degrees in both artificial intelligence and music composition.

Koops explained the rules: the teams had to use AI to create a “Eurovision-like song” that was a maximum of three minutes long. The judges then evaluated the process they took, the creative input of the AI, and the diversity of the team.

The jury’s marks would make up 50% of the total points. The other half would be decided by an audience vote.

“The spirit of the contest is not to replace composers with AI, but more, how can AI push the boundaries of creativity,” explained Koops.

France’s DataDada pushed the boundary by feeding their AI data from the three best-scoring Eurovision songs from each year and translating what it spat out into English. They then used open source AI tools to generate music and text from the data, and the production software Ableton to turn it into a composition that wouldn’t be too ear-splitting.

The UK’s Brentry also sought inspiration from the past, composing their song with an algorithm that created melodies, chords, and drums from a dataset of 200 previous Eurovision songs.

Team member Tom Collins, a lecturer in music technology at the University of York, was motivated to enter the contest as he was frustrated that so many songs sold as being AI were largely composed by humans.

“We tried to use as much AI as possible and at least show very clearly where that ended and where we began,” he said.

Brentry added lyrics from an AI songwriter system called These Lyrics Do Not Exist. Collins’ wife Nancy Carlisle, an assistant professor in Psychology at Lehigh University, then picked the ones she liked best and turned them into a ballad.

Schiere asked them how they would perform the song on stage. Collins and Carlise suggested holograms and robots, but the best reply came from their son: dancing guitars.

His answer exposed the one thing about Eurovision that the AI contest couldn’t replicate: spectacular live shows.

Karen van Dijk, a producer at Dutch broadcaster VPRO who came up with the idea, had initially planned to do that. But she quickly realized a concert would be a step too far.

“That was was just too big and too complicated,” she said. “That’s why we decided on really focusing on the music, and not on the performance part.”

Van Dijk was also keen to get the fans involved — including a man known as Dr. Eurovision.

“AI is not only the future of Eurovision; I’m convinced that it’s already being used by some of the teams,” he said.

The organizers even got the input of a former Eurovision winner: 1969 champion Lenny Kuhr.

“With some songs, I was really surprised,” she politely observed.

The most surprising thing to me was that some songs were serious pieces of music — something that’s normally frowned upon in Eurovision. Particularly impressive to my ears was I’ll Marry You, Punk Come by Germany’s Dadabots x Portrait XO.

And the judges loved it:

The group topped the leaderboard ahead of the final round of voting.

The final standings were decided by 12,000 audience members, who judged the songs based on their quality, “Eurovisioness,” and originality.

Their votes whittled down the contenders until just two remained in the running: Dadabots x Portrait XO and Uncanny Valley. The Australians needed 9.4 points to take the top spot.

“This is the moment of truth you guys,” said co-host Emma Wortelboer. “Uncanny Valley; you guys got: nine point…….eight points from the public vote!”

Suddenly, bangers were sparked and gold confetti dropped from the ceiling to celebrate a moment in history: the first Australian victory in Eurovision — created by an AI system.

Wortelboer was asked if the songs were good enough for the original Eurovision.

“Well, to be completely honest — I think they can,” she said. “Definitely. Have you ever listened to the song festival?”

I have — and I think the AI version is even better.