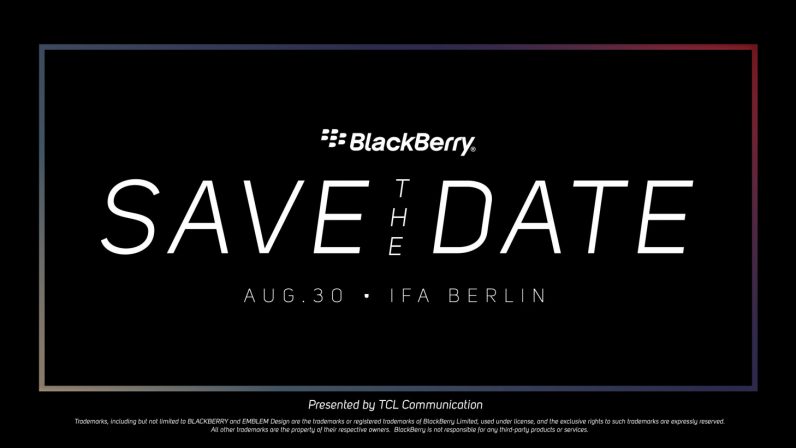 Later this month, Berlin will be home to the IFA consumer technology event, where it’s expected we’ll see a new BlackBerry phone.

Adding fuel to the speculation, TCL Communications, which licenses the BlackBerry Brand, just emailed the following save-the-date to reporters.

Just got a save the date from TCL (BlackBerry licensor). Is this the upcoming Key2 Lite? https://t.co/Q3l8kCCqf8 pic.twitter.com/nwr8sMGUKf

TCL plans to tell all at an evening event on Thursday, August 30.

So, what’s it got under its sleeve? It’s almost certainly going to be a budget QWERTY handset, probably called the Key2 LE — or maybe Key2 Lite.

This is expected to to be a reworked version of this year’s Key2 phone, but with specifications more becoming of a budget phone.

According to Android Police, who got their hands on full specs and some product shots, we can expect to see a slower processor, less RAM, and a slightly weaker battery.

Another major compromise is with the keyboard, which lacks the trackpad functionality that we loved on the KeyOne and Key2.

So far, the rumor mill has been depressingly quiet about pricing details, but you can expect it to be more palatable than the $650 Key2.

Obviously, nothing is confirmed — not even that TCL plans to launch a phone. That said, it’s the most likely turn of events, especially given the flurry of leaks we’ve seen, and the fact that IFA is a favored springboard for new mobile tech.

For the full scoop, you’ll have to wait until TCL’s event at IFA later this month.

Read next: It's not just you: Shutterstock has been up and down for the last day