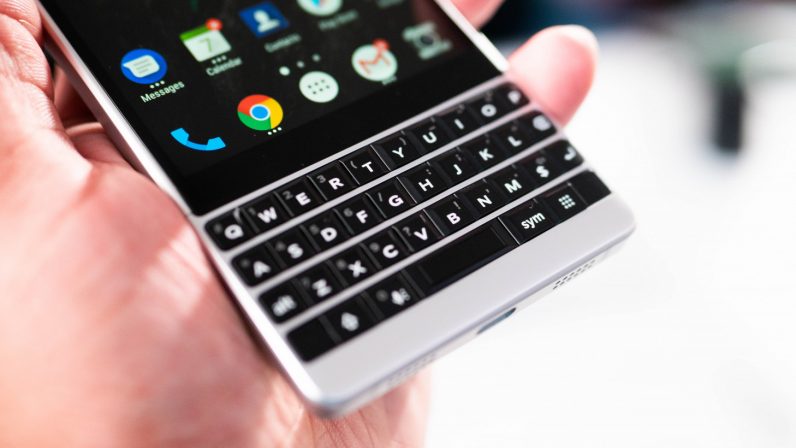 The BlackBerry Key2 is here at last. This is the second keyboard-endowed phone to come from TCL, which has licensed the BlackBerry brand since 2016.

And it’s a cracker of a phone. I’m not saying that because I’m a die-hard BlackBerry fan who never quite accepted the company’s decline, and still sheds a tear whenever he sees a physical keyboard in the wild.

I’m saying that because TCL has replicated what made earlier BlackBerry phones — like the Bold 9700 from 2009 — so beloved. Typing out an email on the Key2 is nothing short of exquisite. It’s the productivity equivalent of wiping your cack-encrusted arse with the finest silk. It feels that good.

But beyond that, the Key2 is just a really great phone.

It runs the latest version of Android, with a few modest security-oriented tweaks that will appeal to enterprise users, but don’t get in the way of ordinary use. The screen is bright and vivid, and the speakers are loud and punchy. The camera — which is the first on a BlackBerry device to pack two lenses — is a massive improvement over the KeyOne.

Sorry, I’m getting ahead of myself. I’ve just really bloody enjoyed using the Key2. I know you lot are expecting a review (what with this article’s title and everything), so read on for our final verdict.

TCL has positioned the Key2 as a mid-range phone, so don’t expect flagship specs. That doesn’t mean it’s a slouch — perish the thought. Rather, it’s worth pointing out that TCL has prioritized the things that a business user is likely to need.

The Key2 ships with Qualcomm’s power-sipping Snapdragon 660 silicon. This is very much a mid-range chipset, but paired with the Key2’s decent-sized 3,500 mAh battery, offers commendable endurance. Depending on your usage, you can easly go 24 hours (or more) between charges.

These specs aren’t exactly earth-shattering, but they’re respectable, and I found that the Key2 was able to handle pretty much everything I wanted to do. From marathon Twitter sessions, to commutes spent browsing the Internet, and even a bit of Netflix, the Key2 managed to hold its own. I even managed to eke out a big of casual gaming with the handset.

The Key2 comes in two color options; one silver, and one that’scompletely jet back. TCL seeded me with a review unit in the latter configuration. I’m not complaining though. The all-black Key2 is absolutely gorgeous.

The Key2 is a fairly conventional-looking BlackBerry device, and faithfully treads the same path as its older brother, the KeyOne.

On the back of the phone, you’ll find a textured rear panel that feels eminently grippable. Even though it’s plastic, it doesn’t feel cheap in any way. TCL has worked hard to ensure that the Key2 carries itself with a premium aesthetic, which is a good thing, as it’s not exactly cheap.

The screen measures 4.5-inches at its longest side, and has a 3:2 ratio. This is a pretty conventional rectangle, but a squished one nonetheless, and isn’t really well-suited for split-screen applications and movie watching.

That’s a shame, for a couple of reasons. Firstly, the screen itself is really good. It’s bright and vibrant, and offers faithful color reproduction. Unlike cheaper devices, the Key2 is easy to read, even in the brightest of outdoor conditions.

But also because the Key2 packs a pair of really punchy speakers which feel ideally suited for watching a movie in bed, or annoying the people on your bus with your taste in “trap music.” They’re ear-splittingly loud, but offer really great audio fidelity.

On the side of the phone, you’ll find the usual buttons — a power button, and a volume rocker. You’ll also find the convenience key, which TCL brought over from the KeyOne, and remains a welcome feature.

You can map the convenience key to any application, allowing you to launch it without having to delve into your app drawer. Personally, I mapped it to the Key2’s camera, allowing me to capture pictures lightning-fast.

I’m missing something, aren’t I? Oh yes, the keyboard.

The keyboard is the unique selling point of the BlackBerry Key2, and it’s clear that TCL has pained over this one aspect of the device. So, what’s new?

First, the keys themselves are 20 percent deeper, offering superior travel and tactile feedback. They’re considerably better than the ones on the KeyOne. Typing out emails felt so unbelievably satisfying, thanks to the improved response, and I was able to write with a level of accuracy you’d struggle to get with a traditional touchscreen device.

I appreciate that physical keyboards aren’t exactly in vogue now, but I definitely feel they’re more satisfying to write on. Composing long emails simply felt less fatiguing than they would on a virtual keyboard — even one like SwiftKey, which tries to do much of the hard work for you with smart suggestions.

There’s also the brand new “Speed Key” which my colleague Napier Lopez gushed over in his hands-on earlier this month. Essentially, this allows you to launch applications by pressing that in combination with another key on the keyboard.

So, you could map the speed key and ‘F’ to the Facebook app, and bring it up in an instant. That’s a nice feature, and it definitely lets you work faster, but I couldn’t help feel it was a bit of a white elephant. I had to remember to use it. When I forgot, I didn’t feel any real sense of loss.

Otherwise, the Key2 keyboard doesn’t feel especially different to that offered on the KeyOne. It retains the delightful capacitive sensor, which allows you to swipe upwards to select autocorrections and word suggestions, and scroll through applications.

The fingerprint sensor is in the same place — on the space key — and feels just as delightfully responsive as last time.

The Key2 is the first BlackBerry phone to carry dual rear cameras. Although photography isn’t really the focus of a BlackBerry device (if that’s your concern, I’d recommend the Huawei P20 Pro), it doesn’t disappoint here.

The Key2 packs a decent enough camera for day-to-day usage, with satisfactory clarity and color fidelity, and an acceptable (but basic) camera app.

Thanks to the dual cameras, you get pretty decent depth-of-field. Although portraits are nowhere near as impressive as those offered by the P20 Pro or iPhone 8, they’re decent enough.

The camera app itself isn’t exactly filled with bells-and-whistles, and offers the user few settings to play around with.

You can set a timer, turn on flash and HDR, and choose between several picture size ratios. If you want to capture something for Instagram, for example, you can choose a 1:1 ratio, but if you’re trying to photograph a gorgeous sunset, you might want to use a 16:9 size ratio.

One cool feature is that you can capture photos by grazing the spacebar. From an ergonomic perspective, this feels amazing, and it’s cool to see the physical keyboard used for something other than typing.

The Key2 comes with Android 8.1 Oreo — the latest and greatest version of Google’s mobile operating system. For the most part, this has remained untouched, save for a few extra security- and productivity-focused additions. These extras set the Key2 apart from other phones on the market.

DTEK, for example, lets you evaluate the security of your device. It’ll highlight potentially insecure settings, and areas for improvement.

There’s also the BlackBerry Hub, which aggregates everything you might care about, from your calendar, to the messages you receive.

Unsurprisingly, it also comes with BBM. Most people have moved from BlackBerry Messenger to rivals like WhatsApp and Facebook Messenger, but it remains popular in some markets, like Indonesia. BBM also still maintains a small toe-hold in the corporate world, too.

And then there are other smaller utilities which are nice to have, but easily ignored. One, for example, called Redactor, is a screenshot utility that lets you remove sensitive information. That’s pretty handy.

It’s worth noting that these additions are easily ignored, If you don’t want to use them, you don’t have to.

The BlackBerry Key2 is arguably the best phone to every carry the logo of the iconic Canadian phone company. It improves on 2017’s KeyOne in almost every way possible — from the keyboard, to the camera. TCL has outdone itself here.

Of course, the Key2 isn’t a mass-market device. It’ll appeal to a couple of niches: the few remaining BlackBerry faithful, as well as those concerned about getting shit done on the move.

From what I’ve seen, the Key2 will satisfy both of those camps.

You can pick up the Key2 from today. It’s available in the UK for £579. Punters in the US and Europe can grab one for $649 and €649 respectively, while it’s being flogged in its Canadian heartland for $829 CAD.

Read next: Let Upmetrics put your business plan on track for under $30