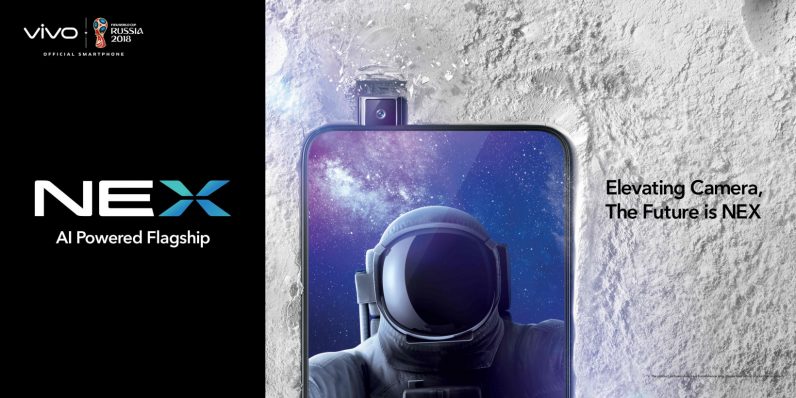 At an event in Shanghai, Chinese phone manufacturer Vivo today announced the launch of its latest flagship device — called simply the Vivo NEX.

The NEX takes the current convention for bezel-less displays, and pushes it a notch further (pun absolutely intended). The phone boasts a (frankly bonkers) 91.24 percent screen-to-body ratio, which is about as high as you’ll get on any phone.

The 8-megapixel front-facing camera is actually hidden within the body of the phone, and pops up when it’s to be used.

That’s a pretty nifty design, although the cynic in me thinks that it’s yet-another complicated component to break — especially if you’re a selfie-fiend, and constantly exposing the pop-up mechanism to wear-and-tear.

Another weird feature of the Vivo NEX is that it ditches the earpiece entirely, replacing it with the company’s Screen SoundCasting Technology.

This, the company says, offers better call quality than a traditional earpiece, with “more powerful bass and softer, smoother treble.” TNW is receiving a review unit in the coming days, and we’re really excited about testing this feature in particular.

The Vivo NEX also saves space by using an under-screen fingerprint reader, much like the ultra-extravagant Huawei Porsche Mate RS. This helps Vivo accomplish its ultra-extreme screen-to-body ratio, but at a cost. My colleague Abhimanyu tried the device, and complained that the fingerprint reader wasn’t especially responsive.

For what it’s worth, that’s been my experience with the technology too, on both the Huawei Porsche Mate RS, and on the Honor 10 (which uses an under-glass fingerprint reader). When it comes to speed and accuracy, you simply can’t beat a dedicated fingerprint reader.

The NEX is Vivo’s latest flagship phone, and it’s appropriate it receives flagship specifications. The device packs a Qualcomm Snapdragon 845 SoC, which is backed up by 8GB of RAM, and an Adreno 630 GPU. It also boasts a 4,000 mAh battery, which is pretty sizable.

In terms of storage, users get 256GB to play with (less whatever the system uses). Truthfully, I can’t imagine ever coming close to filling that up. It seems a little excessive. That said, I can imagine it being welcomed by those who like to hoard apps, or capture lots of high-definition video.

Speaking of which, the phone backs a dual-camera setup, with a 12MP primary shooter, and a 5MP secondary one. Vivo says its infused its camera app with some new AI features, which can produce higher-quality photographs.

Huawei’s done something similar with the P20, P20 Pro, and the Honor 10. It’ll be interesting to see how Vivo’s effort compares.

Potential punters will be delighted to hear the Vivo NEX runs Android 8.1 — although it’s Vivo’s own spin on it, called Funtouch 4.0.

Chinese phone manufacturers are no stranger to taking an axe to Android, and crafting it in their own image. Just look at Xiaomi’s MIUI, which is actually really decent (I actually prefer it to stock Android). It’ll be interesting to see how Vivo’s attempt stands up.

The Vivo NEX will be available in China in black and red variants. As mentioned, TNW is getting its grubby paws on a review unit, so stay tuned for our final verdict.

Read next: Manage customers the way they deserve with full Salesforce Certification training