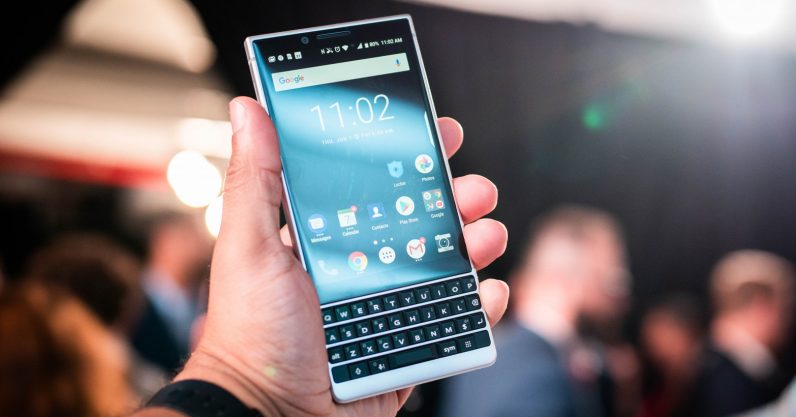 After weeks of teasers and leaks, TCL’s Blackberry Key2 is finally official. If you have dearly missed a physical keyboard this is obviously the phone for you.

But even if you’ve never cared about a clicky keys, the Key2 is compelling in just how different it is from the competition. It’s unique combination of features is making me reconsider my definition of a ‘powerful’ phone.

The keyboard obviously means the BlackBery Key2 isn’t your typical flagship. But that doesn’t mean it doesn’t feel premium. It features a metal frame that feels about as solid as any Apple or Samsung device, but the back has a grippy soft touch finish. This feels more luxurious – and much less fragile – than the trendy glass backs on so many devices (especially those without wireless charging).

For those upgrading from the KeyOne, the improved materials make it feel more like a high-end device. And the new keyboard is great; it’s now 20 percent larger without increasing the device’s frame. It feels nice and clicky like the best BlackBerry’s of old. Also, the power button is now on the right side of the device – where it should be.

More than anything, I’m unreasonably excited about the new ‘Speed Key.’ This is basically allows you to access shortcuts from anywhere, such that you can switch between apps – or specific functions within them – without returning to your home screen or even opening the recent apps page. Press the key and a corresponding letter and you can quickly switch from, say, Instagram, to Twitter, to Whatsapp instantly.

Sure, the phone may not have the fastest processor around (more on this in a sec), but those shortcuts alone make switching between a variety of apps faster than possible on a Pixel 2 or OnePlus 6; it was pretty much instant during my brief testing. It’s such a simple and effective idea I wish it were on every smartphone, but of course, that’s not possible, because almost no other phone has a physical keyboard.

The only real qualm I have with the device, is that despite smaller bezels, it does still feel like there’s some wasted space. Replacing the capacitive buttons with virtual buttons and shaving off a millimeter here of there could have allowed it to have 16:9 screen much better suited to media or running two apps in a vertical split-screen view. The latter is a productivity feature I use all the time, including for drafting this very article on my Pixel 2.

Nonetheless, BlackBerry Mobile is challenging the idea that maximum specs are what makes a phone a more productive machine. That’s apparent in the Key2’s internals, which include a combination of specs unlike anything I can think of.

We go into more details about these specs in our announcement post, but BlackBerry Mobile is emphasizing multi-tasking and battery life over raw processing power. The Snapdragon 660 suggests it’s a mid-range device, but then it has 6 GB of RAM – 2GB more than the Galaxy S9 or Google Pixel 2.

It’s also packing a 3,500 mAh battery despite sporting just a 4.5-inch screen. For comparison, that’s the same as the 6.3-inch Galaxy S9+, and 500mAh more than the 5.9-inch model. Coupled with a more efficient processor, BlackBerry’s claim of two-day battery might actually hold true. It comes in 64GB and 128GB configurations, has expandable storage, and manages to keep a headphone jack too.

Despite my initial enthusiasm, it’s immediately clear the Key2 isn’t a phone for everyone, and it’s not going to return the brand to its market dominance of yore. But even from my brief impressions of the Key2, I feel the company has the potential to strengthen it’s security and productivity niche.

Of course, the proof is in the BlackBerry pudding (yum?). There are still question marks over long-term performance, image quality from the dual cameras, and whether that battery actually holds up. At $649, it’s priced lower than many flagships but faces stiff competition from the $529 OnePlus 6 and the ~$500 Honor 10.


We’ll be spending more time with the device soon; we’ll see if the nostalgia googles have worn off in our full review.

In the meantime, pre-orders for the BlackBerry Key 2 begin in this month, and the device will sell for $649. Wide availability will arrive in July; BlackBerry Mobile says it will have more to share “very soon.”