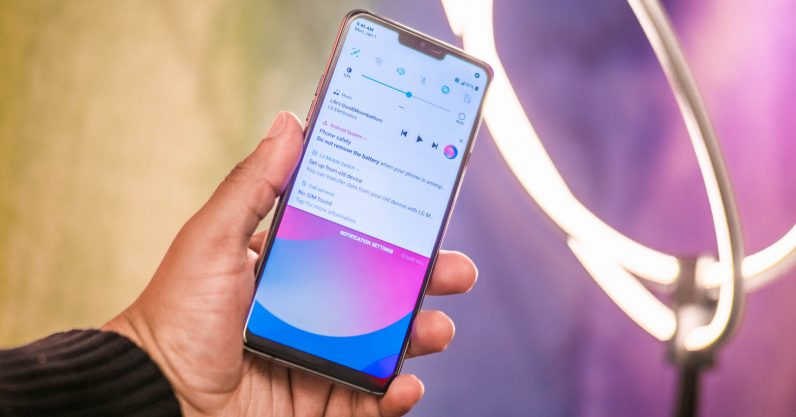 After months of delays, leaks and teasers, the LG G7 ThinQ is finally here. It’s pretty much everything you’d expect from an LG phone in 2018, for better or for worse. But mostly better, I ThinQ.

First things first: yes, ‘ThinQ’ is part of the name; LG is insistent on using it for its marketing strategy connecting its family of AI-powered electronics, ranging from phones to refrigerators. But it sounds ridiculous, and considering there isn’t a non-ThinQ version of the phone, I will simply call it the G7 from here on out.

LG reportedly delayed its planned March launch in order to redesign the phone. While I was hoping that would be signify a radical new design direction for the company, it turns out it just meant cutting a notch into the screen, despite the keeping small chin at the bottom.

It’s not so bad though. The chin is about the same size as the bottom bezel on the LG V30 or Galaxy S9. The notch, meanwhile is relatively short – about the same size as Android’s status bar – so it never really intrudes on content. And as on the Huawei P20, you can turn the background around it black to hide it altogether in the phone’s settings .That still leaves you with small bezels all around.

The rest of the design is usual fare – pretty enough, but not particularly ambitious. There’s a glass back, which comes in four colors: gray, black, blue, and pink. The cameras are oriented vertically this time, and the power button is separated from the fingerprint reader. Oh, and there’s a dedicated Google Assistant button on the left, which has been augmented with some custom LG commands. This is better than Samsung’s Bixby button by virtue of not using Bixby, but it’s not reprogramable. LG says it will listen to user feedback on that front, but it all seems a bit silly after all the backlash Samsung went through.

Now that even Apple has gone with OLED technology, it’s somewhat surprising that LG is sticking to LCD for its displays. But it’s is a really nice LCD. The 6.1-inch screen gets super bright at 1,000 nits, but is also 30 percent more efficent than the panel on the G6. The screen also covers 100 percent of the DCI-P3 color space, and you can tweak the RGB settings to your tastes as well.

Spec wise, well, it’s a 2018 flagship. It comes with 4GB of RAM and 64 GB of storage in the US, although other markets will have a 6GB/128GB configuration. The battery is 3,000 mAh, which seems a tad small relative to its screen size and the competition. There’s still expandable storage, and there’s still a headphone jack, powered by LG’s unmatched Quad-DAC for audiophile-worthy sound. As far as I’m concerned, that sound chip is still the best reason to buy an LG phone.

Speaking of sound, LG still doesn’t have stereo speakers, instead opting to go louder. The G7 uses the entire inner spece as a resonance chamber to get surprisingly loud and reach surprisingly low. This isn’t a phone you’ll have trouble using on speakerphone or to play some music while washing the dishes (it’s still water resistant, by the way). There’s also DTS:X onboard to help improve immersion when watching supported content.

Then there’s the camera. It may be what makes or breaks LG this year after a disappointing performance in 2017, when it was leapfrogged by much of the competition.

As usual, LG’s second lens provides a wide-angle perspective, something I far prefer to the telephoto or monochrome sensors on other devices. But LG is claiming improved performance thanks to AI (of course) that can recognize a variety of scenes and subjects. A new ‘Super Bright’ mode gives you the option to increase exposure in very-low-light, but I appreciate this is an option that can be disabled on the fly. I find these features tend to make low light scenes unrealistically (and unpleasantly) bright.

The company is also introducing a portrait mode for the first time; it uses the dual camera setup on the back for depth information, but like the Pixel 2, it works on the front using AI exclusively.

And that’s about it. We don’t know the price yet, as LG is leaving that up to carriers, but I imagine it’ll be in line with other flagships. Otherwise, it’s a good looking device that hits the expected 2018 beats, but my first impression is that not much particularly stands out other than the DAC and wide-angle cameras, which aren’t exactly new for LG.

But those are still unique selling points, even if the rest of the phone isn’t exactly groundbreaking. As always, performance, battery life, and picture quality are the big variable’s we’ll have to spend more time with to make a fair assessment – I’m looking forward to putting the device through its paces once we get our hands on a review unit.