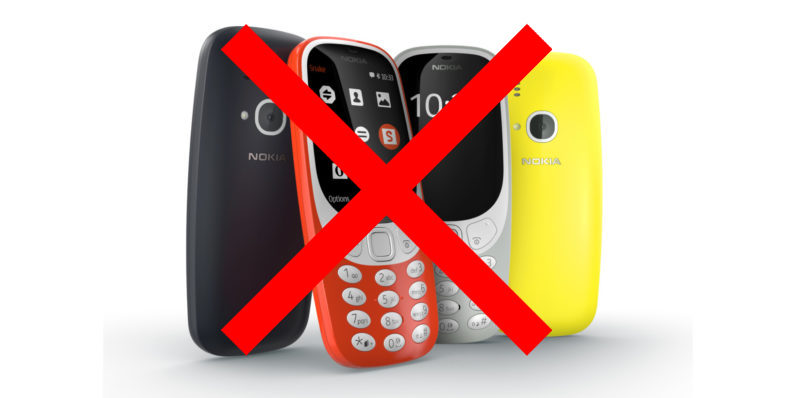 Residents of the US, Canada and Australia itching to ditch their flashy smartphones for the HMD reincarnation of the Nokia 3310 better curb their enthusiasm – the handset will likely be practically unusable in these countries.

Gadgets 360 reports that, while HMD Global kept some of the most recognizable aspects of the 3310 like its large keyboard and lethal sturdiness, it also retained its old band frequencies. But here’s the thing: This will render the phone virtually impossible to connect to most present-day carriers.

Much like the original Nokia 3310, its new and improved remake will support only two bands – 900MHz and 1,800MHz. While these frequencies were easily compatible with the 2G connections during the golden days of the 3310, the advent of the internet has phased these bands out in many parts of the world.

To operate across the globe without any restrictions, handsets must support at least four bands, including 850MHz, 900MHz, 1800MHz and 1900MHz.

Most carriers in the US and Canada no longer support the frequencies the revived 3310 does. The same goes for Australia and Singapore, where carriers are gradually shutting down 900MHz and 1800MHz bands.

The reborn Nokia 3310 is slated to drop in India later this year with the modest price tag of $50. Still that’s about twice as expensive as its similarly-specced Nokia 150 sibling. So in case you desperately yearn to swap out a smart for a dumb phone – at least you have some options.