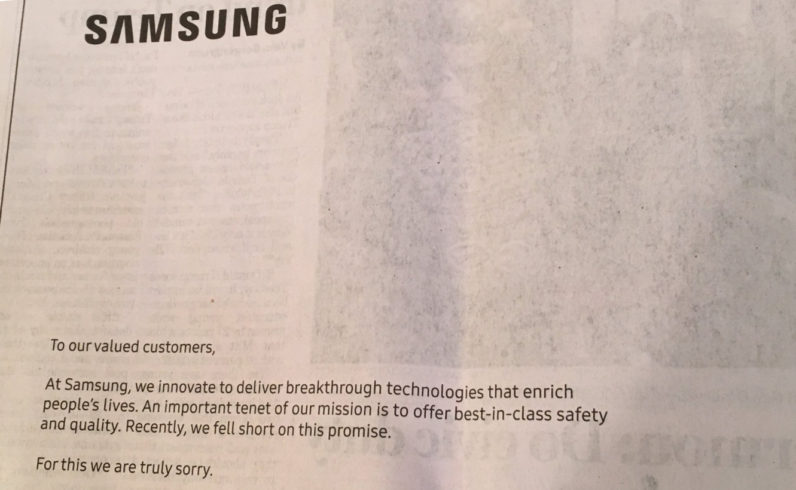 Samsung has been walking through the fire over the last few weeks after the South Korean tech titan had to resort to discontinuing its flagship Galaxy Note 7 lineup following numerous reports of exploding devices.

In an effort to win back the trust of consumers, today Samsung ran full-page apology ads in three major US daily newspapers. Aimed at English-speaking consumers, the apologetic statement appeared in Monday editions of The Wall Street Journal, The New York Times as well as The Washington Post.

An important tenet of our mission is to offer best-in-class safety and quality. Recently, we fell short on this promise. For this we are truly sorry.

We are working swiftly to ensure the remaining Note 7s are safely returned. For those directly affected, we appreciate your patience throughout the exchange process.

Most importantly, safety remains our top priority. We will listen to you, learn from this and act in a way that allows us to earn back your trust.

We are grateful for your ongoing support and again, we are truly sorry.

Here’s a tweet of the full-page apology as it appeared in The Wall Street Journal.

Full-page apology ads are the future of print media: pic.twitter.com/fBAZ9uXFmD

In addition to the Note 7 catastrophe, the South Korean giant also took time to address its recent decision to recall a staggering 2.8 million top-load washing machines following complaints the devices are falling apart during use.

Samsung is hoping to make a bang with its upcoming Galaxy S8 lineup, slated to arrive next year.

Among other things, the device is expected to feature a slick edgeless OLED display, a new AI virtual assistant as well as boosted camera capabilities. Other rumors suggest the S8 might ditch the iconic home button altogether.

Whether the new and improved Galaxy S8 lineup can shift the wind in favor of the South Korean manufacturer is yet to be seen. But given the crucial role it has played in recent years, it’d be a shame to see Samsung fade away.

Read next: Limited time only: A lifetime subscription to the world’s fastest VPN is dropping to its lowest price ever