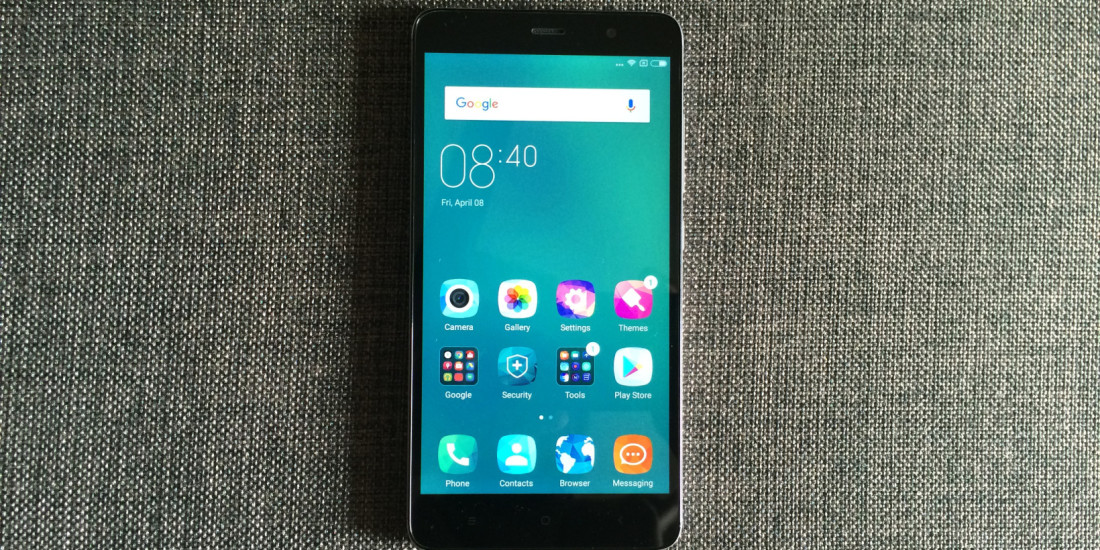 Xiaomi has been cranking out quality handsets over the past couple of years at attractive price points. I really liked last year’s Redmi 2 and was anxious to put the Redmi Note 3 through its paces to see what you could get for $150 (Rs. 10,000) in India.

The 5.5-inch Note 3 has a sleek aluminium body with little to distract from its gently curving lines. Save for the polished trim and the color-matched sections at the top and bottom, the design is clean and fluid. It’s complemented by Xiaomi’s trademark minimalist hardware buttons as well as the slim volume rocker and power button on the right.

The phone feels significantly lighter than its 164g weight. Because it’s nicely balanced and the sides are softly curved, the Note 3 is easy to hold for extended periods of time, whether you’re gaming or watching a show.

What I particularly enjoyed about this device is the beautiful matte finish on the sandblasted aluminium back and sides. It looks great from every angle and most people would guess this was a much more expensive product than it is.

The Note 3 comes in three finishes, gold with a matching front fascia, silver with a white front panel and grey with a black front. While I’m drawn to the handsome grey version, the gold one stands out from most other devices.

The Note 3 features a 5.5-inch full HD display, making for a sharp-enough pixel density of 401ppi. I like that it gets plenty bright to use in the sun and also lets you turn it down lower than other phones for reading in bed or to save power.

You can adjust the color temperature and contrast in the Settings menu. There’s also a handy reading mode that cuts out blue light to reduce eye strain; it can be engaged either across the OS or for specific apps.

A single speaker on the back of the device, near the bottom, sadly doesn’t get loud enough to enjoy music on the go, and the problem is compounded by a poor soundstage. However, it’s fine when you’re in a quiet space and need to catch up on podcasts or YouTube videos.

That being said, the Note 3 offers plenty of options for enjoying audio with headphones on. There’s an equalizer with a number of presets that you can fiddle with, as well as Mi Sound Enhancer settings to suit the type of headphones you use.

I generally don’t mess with equalizers much, but switching between the settings for various types of earphones drastically affects the sound. I’ve got a in-ear set that’s very bass-heavy and this option helps correct it easily for more natural output.

This phone packs a ton of handy features, including a fingerprint reader, Child mode to lock down apps, and an IR blaster to control your TV and other appliances.

I found the fingerprint reader to be fairly quick. Xiaomi says it take 0.3 seconds to unlock your device; I couldn’t tell much of a difference between this one and the sensor on my iPhone 5S. It worked better than the LeEco Le 1S, which failed occasionally and was a bit slower to respond.

The Note 3 includes dual 4G SIM slots, one of which can accommodate a microSD card for upto 32GB of additional storage.

There’s also a massive 4,050mAh battery that will quickly spoil you – I easily got a day and a half with normal usage from a full charge. The Note 3 supports quick charging so you can juice up about 50 percent in just an hour and pretty much get through a day without much of a fuss; however, using GPS on 4G and gaming will certainly take a big bite out of its power reserve.

On the features front, I was disappointed with the Note 3’s overall score for its lack of a NFC and the placement of the fingerprint sensor on the back. Neither of these are deal-breakers, however, so take this with a grain of salt if you’re not particularly concerned about them.

The Note 3 I tested shipped with Android 5.1 with Xiaomi’s excellent MIUI 7 software layer on top. There’s a lot to like about the custom OS: it’s fast, supports a theme store with a diverse selection of options to trick out your phone, and is well designed, from the Settings menu to the diminutive notification bar.

MIUI 7 also has a bunch of well designed apps for things like email, notes, data usage tracking, remote controls for appliances and texting.

Xiaomi has done a great job with its theme store – it’s easy to switch up the look and feel of the device with just a couple of taps, and there’s an ever-expanding range to choose from.

The launcher does away with the app drawer (which I wish it didn’t), but it allows you to move and uninstall multiple apps at once. However, it lacks options to automatically organize apps alphabetically or by install date, which means you’re on your own if you want to clean up your home screen.

Overall, MIUI 7 offers a pleasant experience and performs very well across the board. However, power users will likely want more control over the interface and switch to a custom launcher like Nova.

The Note 3 has perhaps the best camera I’ve used on a sub-$200 phone. The 16-megapixel rear snapper focuses quickly and does a good job reproducing colors and contrast naturally. However, it does have trouble with detail in extremely light or dark spots.

It’s fairly easy to get a bit of depth of field in your pictures thanks to the large f/2.0 aperture and the phase detection autofocus.

The HDR mode is particularly impressive – it adds nuance to your shots without going overboard and works nearly as fast as the standard shooting mode.

The phone is capable of shooting 1080p video, but the quality doesn’t compare to that of its still images. I did appreciate the camera’s quick metering to adjust to varying intensities of light and found the audio to be clear and balanced – but I didn’t once feel tempted to use the feature.

The 5-megapixel camera in front is a lot better than others I’ve tried, like those on the LeEco Le 1S, Xiaomi Mi 4i and the OnePlus 2. Pictures are sharp and detailed even under artificial light, and are an absolute treat outdoors. There’s also face recognition and a Beautify feature to smooth out blemishes automatically, which works fine when set to ‘Low’.

The camera app offers a ton of features, including live filters, manual controls, a gradient display to help straighten your shots, and even a faux Fisheye shooting mode. The interface is well designed, allowing you to access controls by swiping and getting out of the way when you just want to focus on composing your shot.

Under the Note 3’s hood is a Snapdragon 650 1.8GHz hexa-core processor paired with an Adreno 510 GPU and either 2GB or 3GB RAM depending on the variant you choose.

Over weeks of daily use, the Note 3 didn’t skip a beat when flipping through Facebook and Instagram feeds, switching between apps, taking questions on Google Now’s voice search.

It also ran graphics-intensive games like Hitman: Sniper, Relic Run and Total War Battles: Kingdom fairly well. Besides the occasional stutter in frames on endless runners, the Note 3 gave me no reason to complain while gaming on long commutes.

With the Redmi Note 3, Xiaomi has once again proved it knows how to make a budget phone better than anyone else. It offers exemplary build quality, solid performance, a great feature set and one of the best Android OS forks out there, for a very reasonable $150.

You’d be hard-pressed to find a better deal at this price range. Typically, sub-$200 phones are either poorly designed or scrimp on useful features like fast charging, and almost always come with a crappy camera.

Not so with the Note 3 – it checks all those boxes and then some. I liked it more than its closest rival, the LeEco 1S, because it offers a significantly better camera and OS while costing $15 less. It also beats out the 3rd generation Moto G in terms of build quality and performance.

If you’re looking for a great phone on the cheap, you can’t do much better than the Redmi Note 3. The only bummer is that it’s only available through Xiaomi’s annoying flash sales – but even then, I’d say it’s worth the hassle.

Read next: Watch 1,200 people fall on each other just to break a world record