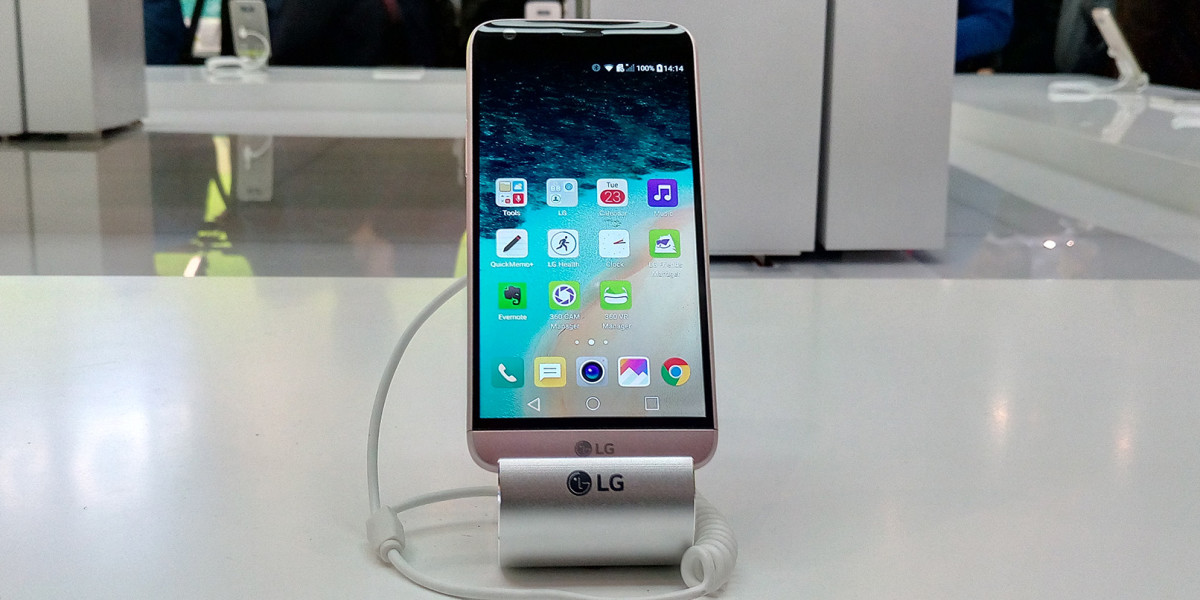 LG’s newest flagship is nothing like any device it has made before.  Instead of merely focusing on packing top-shelf components into its new G5 smartphone, the company created a modular device that lets you add functionality by swapping out parts, and also built an ecosystem of fun accessories that clearly differentiate this year’s offering from everything else on the market.

At Mobile World Congress in Barcelona, I got my grubby paws on the G5 as well as its ‘friends’, as LG likes to call them. Here’s what I found.

Unlike Samsung’s Galaxy S7 which is all sleek, shiny and business-like, the G5 is geared towards helping you get the most out of your downtime. It has a nicely designed aluminum body with a distinctive curve at the top, and it feels a lot lighter in the hand than its 159g weight.

To swap the bottom out for the camera or audio module, you need to press a button on the left and then pull it out at the center. Then you can yank the battery off the bottom and fit on the module you want to use.

It’s not difficult, but it feels like you’re taking apart a cheap toy rather than a high-end device, and the plastic internal components look like they might snap if you’re not careful fitting everything together.

There’s a fingerprint sensor on the back, which doubles as a power button. I’m not a fan of this position because it requires you to lift the device from where you left it to unlock it, but thankfully there’s an always-on display to show you notifications as well as the time and date at a glance.

However, you’ll be tempted to turn on the 5.3-inch quad HD display often. Its pixel density of 554ppi allows it to deliver tack-sharp images, and just about everything from everyday apps to video clips look great on it.

The G5 is lightning-quick, thanks to its Snapdragon 820 processor paired with 4GB RAM. It runs Android 6.0 Marshmallow with LG’s elegant Optimus UI on top. It’s nice that in addition to 32GB of internal storage, you can add up to 2TB of space with a microSD card.

So, by itself, the G5 has a lot to offer — it just doesn’t feel that way in your hand. However, the accompanying accessories make the G5 a very interesting device to own.

If you’re an avid photographer, the LG Cam Plus module is worth a look. It adds a grip similar to those on point-and-shoot cameras for a more natural feel, along with a dedicated shutter button, a switch to launch the camera app and a wheel that you can roll to zoom in and out. Plus, it adds a 1,200mAh battery so you can shoot for longer without running out of power.

The rear camera, which is really two shooters in one, performed well in my brief testing at MWC. There’s a standard 78-degree lens snapper and another with a 135-degree wide angle lens to capture more in your frame, which would be great for landscapes and group photos. LG says it affords a viewing angle that’s roughly 1.7 times wider than those of other phone cameras.

It’s worth noting that you’ll have to deal with a bit of distortion towards the edges, just as you would with similar optics on a DSLR camera. To switch between them, all you need to do is zoom. The default camera app offers several modes and manual settings, and you can show or hide them depending on how you want to shoot.

It was hard to tell with headphones just how much the B&O Play audio module helps — with standard earphones, the difference isn’t significant. LG has been hinting that this is intended for use with high-end audio systems, so it’ll likely need more thorough testing. Oh, and it’ll work without the phone too.

Now, on to the more interesting toys in LG’s playroom. The company unveiled its 360 VR headset, which is a lightweight pair of foldable goggles that connect to the G5 via a USB Type-C cable and negate the need to mount your handset onto it. According to LG, it simulates a 130-inch screen viewed from two meters away.

It’s a great idea and in my mind makes a lot more sense than Samsung’s Gear VR. In addition to being more comfortable, it also turns your phone’s entire screen into a giant handheld button for interacting with content, so you don’t have to feel for the button on the top of the goggles. This makes it a lot more natural and akin to the HTC Vive.

However, the version shown off at MWC, which I was told may not be the final production model, felt flimsy and the suede-like material covering the shield around your eyes had already begun to pick up grime.

To complement the headset, LG also created the 360 Cam, which has two 13-megapixel wide-angle camera to shoot 360-degree shots as well as 2K video. It can be used to shoot landscapes and urban scenes for sharing on Google Street View as well as more immersive memories that you can enjoy looking at through VR goggles.

You can also place the camera on a table and capture a scene around you, like all your friends together at dinner. It includes three microphones for capturing high-quality audio, but it’ll need extensive testing to hear how it performs in the real world.

My favorite of the lot is the Rolling Bot, which is a 1 kg plastic ball with an 8-megapixel camera that you can remotely control to see what’s going on around your house. It has a mic and speaker so you can direct it towards your kids and talk to them from the office, or tell off your dog for hopping on the couch.

To do this, you can use a companion app to live stream video from the bot’s camera and control its movement using on-screen controls like you would with a vehicle in a video game. At MWC, its response was laggy but I was told that it was due to all the Wi-Fi interference at the venue.

It also has other neat features like a laser pointer to engage your cat with, an IR blaster to control your TV, audio system and air conditioner and a one-tap command to send it back to its charging base. That will certainly come in handy, given that the bot offers only about 1.5 hours of actual use on a single charge.

Overall, LG’s accessories for its G5 make the phone an interesting prospect and separate it from the rest of the flagship pack. However, they might also seem a tad gimmicky to those who just want the best performing device their money can buy. I’d happily recommend that you check it out, but the poor build quality might put you off.

Read next: Startups are moving to Amsterdam, but should you?