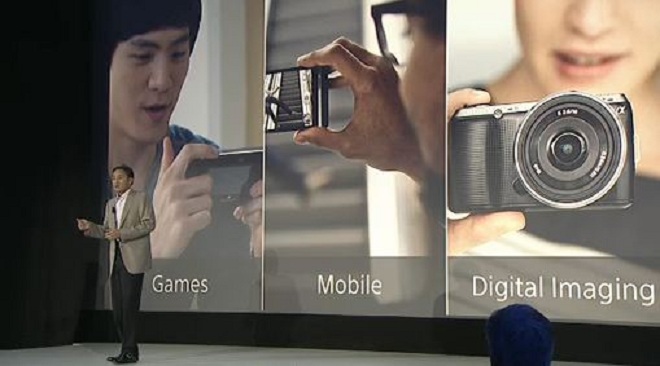 It’s no secret that Sony has had a rough road the past few years, but its new CEO Kazuo Hirai took the stage at IFA in Berlin today to talk about how he plans to lead the company out of its slump. Hirai said that Sony has to look at itself honestly and drive innovation instead of continuing to react to it. To that end the company has today announced a deep lineup of new products that it hopes will push toward its goals.

Hirai opened the talk with an update to its forthcoming Wonderbook product. The Wonderbook, which uses virtual reality to combine a PS3 with a physical book, will launch with a title from J. K. Rowling. The Book of Spells allows readers to use the PS3Eye camera to interact with the book and create new scenarios based upon their inputs.

In the realm of tablets and PCs, Hirai introduced the Xperia Tablet S. It’s an Android-based machine, coming next month. It features a splash-proof body for safe use in the kitchen or a worry-free dash through the rain. It also includes overlaid apps to Android such as a view that brings both social updates and news into a single pane.

The Tablet S features Android 4.0, a Tegra 3 processor and 64 GB of onboard storage. There’s a 1,280 x 800 IPS screen, full-sized SD slot and a 6,000 mAh battery. We should see the Tablet S hit the market in the first week of September, but pre-orders are starting now. $600 will snag the 64 GB model, while $400 gets you the 32 GB version. Oh, and expect accessories. Lots of them. Including a Surface-style keyboard. The device appears to be running Windows 8, in the RT flavor.

Xperia T — Global phone, 4.6-inch Mobile Bravia display at 1,280 x 720, 13 megapixel camera and a “Sleep-to-shoot” feature for super-fast photos. The phone also has NFC, and Sony showed off a new line of NFC-enabled speakers that allow you to switch your music from device to device with a touch.

Xperia V — The V is  a water-resistant, LTE-enabled device.

Xperia J — A budget-focused phone, Sony touts the J as having the best screen size and display quality of any device in its price range. It’s 9.2 mm thick, has a 4-inch display and a 5 megapixel camera. It launches in Q4 of this year.

Hirai also debuted the Vaio Duo 11. It’s a laptop with a folding mechanism that allows the device to be instantly used as a slate. It’s a Windows 8 device, running full Windows 8 and not the mobile-focused RT version. We don’t have pricing or specs just yet, but it’s looking solid.

The final computer-like thing that we saw today is called the Tap20 and it’s a bit hard to explain. It’s a 20-inch tabletop computer, but it’s also a display. You’ll notice that I said tabletop and not desktop. That’s because of its unique design. The Tap20 is meant to lay flat on the table, but an articulating arm will allow the device to be propped up so that you can use it as a focal-point display as well. It’s rechargeable, like a laptop or tablet, but Sony describes its intentions as being a new concept in home computing so we’ll have to see how it fares. Again, no pricing or specs just yet.

So what’s your take? Love them or hate them, Sony has some new ideas that are worth pursuing.

Read next: Amazon takes its local daily deal service to the UK, starting with London