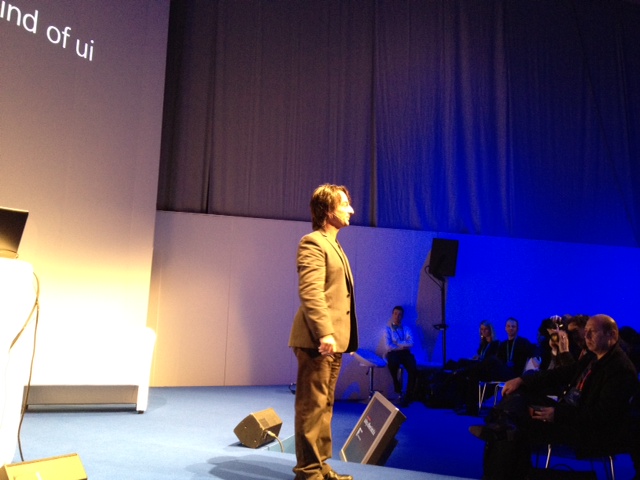 With Microsoft’s new Windows Phone 7.5 update hitting handsets over the past month, the company has been building new services to help extend the compatibility between its gaming and smartphone products and its Internet services.

One such service, Xbox Companion, is intended to allow users to not only control their Xbox with their Windows Phone smartphone, they can also bring up contextual information to interact and display additional media and content whilst they enjoy a film or some other form of content on their console.

Microsoft’s Joe Belfiore, Corporate Vice President of Windows Phone and the guy behind the stunning new Metro interface, took to the stage at Nokia World to introduce Xbox Companion and provide a demonstration of how it works and how it can assist owners of Microsoft consoles and smartphones to make the most of what the company has to offer.

As you can see from the video, Belfiore shows how Windows Phone’s new Mango update has been built to recognise when you are connected to your console, pairing the device with the console to allow you to instantly take control. From with the app, users can search the marketplace for TV shows and films, deciding whether to watch them via Microsoft’s Zune platform on their console.

Once the movie or TV show is loaded, controls are brought up, providing the option to skip through the video and pause from the comfort of their smartphone. The value of the service is really brought home when you see how it loads up data on the actors, providing the user with ways to gain an understanding of what the film is about and who is starring in it.

As a service, Xbox Companion can be added to and built out to include data from different movie studios, connecting to platforms created by third-parties within the Xbox platform, making searching for movie data and associated information a complete joy. It doesn’t just extend to films or TV shows either, it also see some impressive gaming features connect the Windows Phone platform with its console counterpart.

Also demoed after the talk was the Kinect game Kinectimals, a game where you look after and interact with a virtual pet. Downloading the game to a Windows Phone handset, users can choose a character on the device, customize it and interact with it. However, with Xbox Companion gamers can scan their characters onto the console using a customised QR code.

This transfers the same pet you were taking care of on your smartphone, loading it into the Kinectimals game, another impressive example of what Microsoft is planning with its Windows Phone and Xbox integration.

Read next: Facebook app for WP7 set to receive much needed refresh