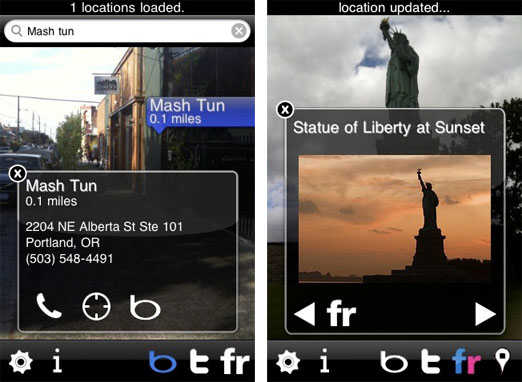 I have to admit, I wasn’t convinced. The Echo’s announcement gave me more of a “what the heck” face than one of excitement. To me, already not a fan of touchscreen keyboards, having dual touch screens just seemed like a grave oversight.

Then I played with the Echo.

Kyocera has actually put a lot of thought into this phone. While it’s running Android 2.2, a few of the apps (most notably, the Gallery) have been tweaked to take advantage of what the Echo can do. For instance, as you’ll see in the video, the Echo allows you to watch a video on one screen, while working on another. Alternately, you can view full-screen images up top, and browse through your collection on the bottom. These are just a couple of things that it can do, but they’re really impressive.

When you have the Echo open, it’s an interesting change on your Android home screen. Both screens are used, essentially turning the phone into a miniature tablet. Viewing maps, especially, is handy with the wider angle that the Echo allows. Documents, too, become much easier to digest in the dual-screen format.

I had to question a couple of things about the Echo. The first one, of course, being battery life. If the Echo is running two screens so often, it’s going to drain some major power. Notably, the representative from Kyocera states that the Echo has done 7 hours of talk-time in real-world testing. Of course, that also means that it likely wasn’t open with both screens in use. Chances are though that talk time is equate pretty equally with using both screens, as long as you’re not doing intensive gaming.

Kyocera ships the Echo with a second battery. Take that as you will, but I’m just going to say that you might want to keep it charged. There’s a reason that it comes with a “free” second power source. There is a charger included, of course, but the rest of the box is all phone.

Speaking of which, the Echo is predictably thicker than most phones on the market right now. Though it also appears to be aimed toward the female mobile population, where a pocket might play second fiddle to a purse for toting around your device.

It’s also worth noting that the Echo uses a z-style hinge to move into its various positions. While it didn’t feel flimsy in the least, it’s a moving part that you’ll need to pay attention to.

The Echo won’t be my next Android phone, but it certainly has enough fun factor to make it one for you to consider. It will be in Sprint stores around the middle of April, so keep an eye out. The price? A frugal $199.

Read next: Nokia to release CDMA WP7 handsets in the US