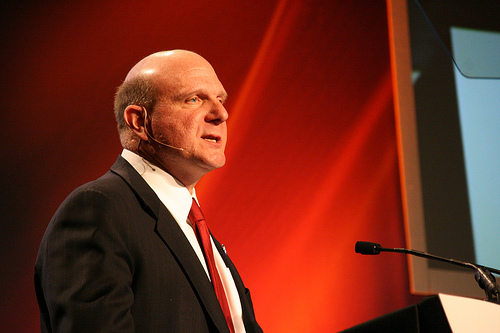 Steve Ballmer, Microsoft’s Chief Executive, did not receive his maximum available bonus for the last fiscal year, even after Microsoft posted its highest ever sales during the period.

According to Reuters, Ballmer received a bonus of $670,000 for the fiscal year ending June 30, half the maximum bonus, as Microsoft counted the mobile costs of its KIN social networking handset and its slow response to compete with Apple’s iPad.

Microsoft posted increasing sales of 7%, bringing in a record $62.5 billion, praising Ballmer for cutting costs, pushing the releases of Windows 7 and Office, as well as building its presence in gaming and cloud computing.

The company’s official wording in its annual proxy filing noted the company had flounders with its “unsuccessful launch of the Kin phone, loss of market share in the company’s mobile phone business, and the need for the company to pursue innovations to take advantage of new form factors.”

Microsoft’s KIN handsets were released back in May, selling only a few thousand units before the project was canned in June, with development team absorbed into Microsoft’s Windows Phone 7 unit.

Windows 7 has been demoed on a number of upcoming tablet devices but Windows tablets have yet to make any impact on sales of the Apple iPad. Ballmer will look to push Windows enabled tablets through Q4 2010 and 2011, HP Slate footage has already been circulating despite any official word from HP.

We are now only weeks away from the release of Windows Phone 7, Microsoft’s new mobile operating system, an OS that received a complete re-write from previous versions which Microsoft hopes will help them recoup some of the market share from iOS and Android.