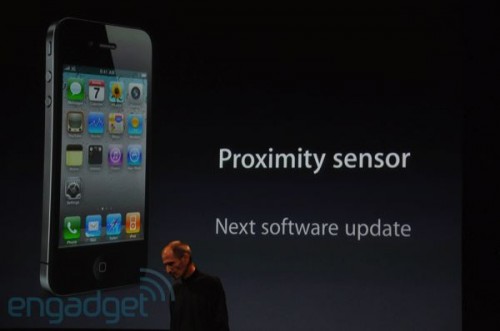 The launch of the iPhone 4 came with quite a few issues; first and most importantly were the antenna issues experienced when holding the device but users also complained of a proximity sensor glitch that would result in the hanging up of calls or mysterious button presses that would mute or invite another person into the call.

When Steve Jobs took to the stage to address the signal issues, he also said that Apple would work on a fix for the proximity sensor glitch, releasing it when they launched the next major iOS 4 upgrade.

With iOS 4.1 in its final beta testing stages and about to be released to the world, it appears the fix will not be forthcoming when it rolls out to users.

Apple Australia spokeswoman Fiona Martin has acknowledged that the company has yet to fix the proximity sensor issue, something that will have iPhone 4 users up in arms if they download the update, only to find the problems are still apparent.

Apple’s September 1st event will likely focus on the company’s new media initiatives, we wonder if this issue will be addressed or swept under the carpet?

Read next: A Guide to Internet Memes [Infographic]