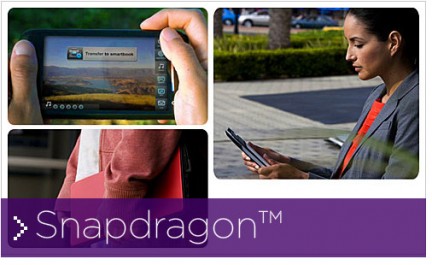 US-based chip maker Qualcomm has said it will start to ship its fastest Snapdragon processor for smartphones and tablets in the final quarter of 2010, with manufacturers expected to include the technology in devices by the end of the year.

The company is hoping its new dual-core QSD8672 chip that incorporates GPU cores running up to 1.5GHz, will be as successful as its QSD Snapdragon chips, chips that have been incorporated into popular smartphones such as the Nexus One and the HTC Evo 4G.

The processor is based on an ARM design and incorporates new features such as the ability to scale individual voltages so each CPU can be clocked independently from the other, meaning when one CPU core is inactive, another core can operate at full speed meaning battery consumption can be better managed. The chip also supports 1080p video playback as well as intergrated HMDI and DDR2 and DDR3 memory interfaces.

So by the end of the year you can expect the latest and greatest smartphones to be a lot quicker than they are currently, not that the Nexus One and the HTC Evo were slow in the first place. With faster handsets, powerful incorporated features and better battery management, it might be worth holding back on that upgrade and waiting for the release of the next generation of smartphones.

Read next: Bing "takes second place in search from Yahoo"