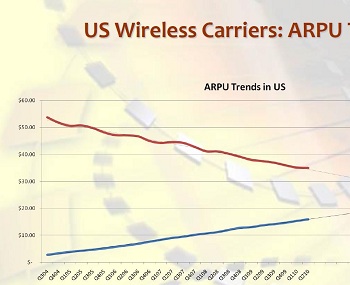 A new report is out showing just how much the American mobile landscape is growing. Perhaps the biggest news in the report is that if we don’t consider people in the US who are of five years of age or younger, there is now in excess of 100% mobile subscription penetration; ie there are more subscriptions than there are people over five years old.

What’s really interesting in the report is what it says about trends in peoples’ mobile usage. Tech geeks who think of their phones more as computers than as devices you talk into won’t be surprised to learn that this is going to be the status quo soon. Since the third quarter of 2004 through present, average revenue per user (ARPU) for voice has gone down from about $54 to $36, while the revenue from data over the same period has gone from $3 to $16. If these numbers continue to change at roughly the same rate, then we can expect people to be paying for their phones more for data use than for voice use.

This is particularly fascinating when coupled with the fact that voice traffic on mobile networks has held stable since 2007, with only a minor tendency towards growth. By comparison, data has grown exponentially. If my read on this is correct, voice accounts for about 2 terabytes a year of mobile traffic, while data accounts for closer to 9.6 terabytes.

I’m sure there are a lot of other notables in this report that I’m not going to get into, so I recommend giving it a read. It’s attached as PDF below.

Read next: Zagat Hits 50,000 Friends On Foursquare, Is The Location Service Mainstream Yet?