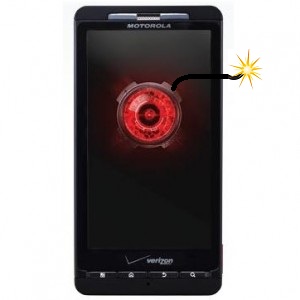 Verizon’s much-vaunted iPhone killer and follow-up to the popular Droid has blown it. Or more correctly, it has blown up.

The device, which promised to be Verizon’s most serious competitor to the iPhone, has been hamstrung with a crude hardware-based method of bootloader protection called an eFuse chip. If it doesn’t detect the standard bootloader when the phone is turned on, it is supposed to blow out a fuse. Which, in turn, essentially turns your brand-new DroidX into a very expensive paperweight. The fuse is only replaceable with Motorola service equipment.

This becomes a serious problem when you realize that if you’re going to root the phone to install Froyo or mod the device, you need to mess around with the bootloader.

In short, this is an appallingly stupid move by Motorola.

Despite the fact that the eFuses are present on the Droid and its GSM twin, the Milestone, some Android fans have asserted that they have not been used to lock the hardware until now. As many Android fans know, the Droid is incredibly hackable and the Milestone decidedly is not. It appears that Motorola has set up the Milestone’s incredibly complex security on top of the tripwire bomb that is the eFuse, which poses quite a tricky task for the Android hacking community.

More importantly, though, this represents a big chance squandered by Motorola and Verizon to take a big swing at the new iPhone4. Many iPhone competitors had fallen short in consumers’ eyes. The Droid Incredible’s screen wasn’t nice enough. The HTC Hero4G had no battery life. The Nexus One was only available on T-Mobile. The Samsung Galaxy S family just didn’t quite have the sexiness of the iPhone4.

The DroidX is mean, lean, sexy, fast, and it could hold a charge for more than five minutes. However, it shipped with a clunky version of Motorola’s Motoblur Android skin. Motoblur is awful. It’s clunky, slow and doesn’t work as well as Android’s native apps.

This wasn’t an issue to many users, however. Most wanted to root the phone, load it with Froyo and have fun with it. With this issue, though, Verizon has completely lost those customers.

You can hold this phone any way you want, but that doesn’t matter if it blows up when you try to get rid of Motoblur.

Thanks to Gizmodo for the images.

Read next: A full length trailer for "The Social Network". Anyone else feeling creepy?