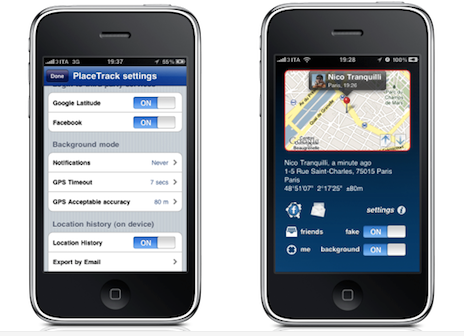 If the app ever makes it through Apple’s notoriously strict review process, PlaceTrack could give Google’s Latitude service a much needed boost by enabling iPhone owners to automatically update their location without having to manually “check-in” each time.

Automatic Google Latitude updates have been part of Android since the launch of Latitude but iPhone users would have to manually “check-in” by way of a browser bookmarklet. PlaceTrack aims to deliver the same functionality as its Android cousin by utilizing iOS4’s new background features, becoming the first iPhone app to deliver such a service.

To get the most out of PlaceTrack all an iPhone user needs to do is to download the app (when/if it’s approved), install it, authenticate with Google, switch on the background feature and then quit the app. It’s that easy.

PlaceTrack has a few clever features – one of the most useful being when the app crashes. If the app unexpectedly quits and backgrounding is enabled, the app will automatically launch itself in the background on the first location change event. Users can also publish location information to Facebook aswell as manually updating via email.

The app can also double as a “Find My iPhone” service, if the app is launched and processing location data in the background, a user can look up their username on Latitude to get an idea of where their phone is (we don’t recommend trying to recover your iPhone yourself, alert the authorities!).

PlaceTrack could help bring Latitude up to the level of its competitors like Gowalla and Foursquare, updating friends as to your whereabouts (should you allow them) at almost real-time. As we mentioned above, the app is still awaiting approval, we will update you once Apple makes its decision.