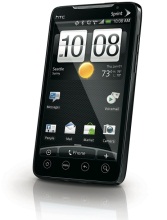 Speculation surrounding the release of the HTC Supersonic has come to end with the official announcement of the HTC Evo, the world’s first 4G Android smartphone.

Utilising the newest Android firmware and HTC’s Sense UI, the HTC Evo has a large 4.3-inch WVGA display offering a resolution of 800×554. Powered by a 1GHz Snapdragon processor with 1 GB flash ROM and 512 MB RAM, the HTC Evo specification wouldn’t look out of place when compared to today’s range of Netbooks.

The handset is capable of holding it’s own as a media device too, boasting an 8 megapixel rear camera capable of 720p video capture, 1.3 megapixel front facing camera and HDMI output. The HTC Evo is also able to deliver movies, pictures and music a great speed, connecting to Sprint’s superfast 4G WiMax networks.

Sprint’s WiMax technology sets it apart from it’s rivals in terms of 4G availability where they currently offer broadband-like speeds to 27 US cities. By the end of the year, 15 additional cities will feature the WiMax service, covering a potential 120 million people.

If all this talk in regards to the Evo’s ability to connect to 4G networks and offer Mi-Fi connectivity is somewhat disconcerting to potential customers, the handset still connects to existing 3G networks as well as wireless networks, sustaining it’s ability to remain constantly connected.

Looking at the specifications, the HTC Evo is going to have smartphone vendors struggling to match the power, form and function of the new 4G compatible device. It’s going to be released in the summer and there is no word on price so in the meantime drink in the screenshots below, read the official Sprint Press Release and sign up for more information on the HTC Evo mini-site whilst we try to find some further information.

Read next: Gowalla: Our SXSW Was Just As Amazing As Foursquare's