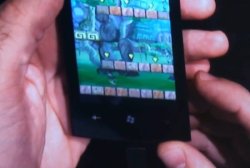 Demonstrations featuring the Windows Phone 7 mobile operating system have emerged, offering a glimpse into what users can expect from Microsoft’s new lineup of smartphones.

The operating system, unveiled last month, is due to be showcased at the upcoming MIX10 conference but the team from WMPoweruser managed to dig up two video demonstrations of the Windows Phone 7 interface shown at the TechEd Middle East conference.

One of the videos shows Microsoft Senior Vice President of Technical Strategy – Eric Rudder shows attendees a basic Indiana Jones type game being played on a Windows Phone 7 Series handset, transferring it to a Windows PC and then to an Xbox. He also adds that the game takes advantage of Xbox Live to allow a user to save the progress of a game on one device and then play on from the same point on another computer.

Rudder cuts to show developers that with knowledge of Visual Basic, games can be developed for all three platforms. In the demo video, the side scrolling adventure game shares 90% of the source code between platforms in one Visual Basic project.

The second video demonstrates the possible multi-tasking abilities of the Windows Phone 7 Series operating system, highlighting background browser page loading within Internet Explorer. Whilst Microsoft haven’t confirmed their devices will support multi-tasking, extra information might be forthcoming when the operating system is detailed extensively at the MIX10 event.

It seems Microsoft are looking to tempt in developers with the promise of limited code revisions for multi-paltform gaming, capturing mobile gamers in the process.

We will cover all of the Windows Phone Series 7 news that emerges from MIX10, so do check back.