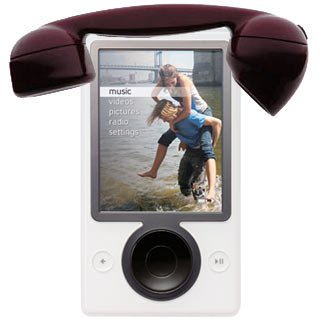 The iPhone killer? Unlikely. But if this report from Spanish blog MuyComputer is true, Microsoft is officially taking a stab at it.

The report claims that the rumors are true and that Microsoft will introduce the world to its Zune Phone at Mobile World Congress in Barcelona this month.

Our source, Gizmodo, notes that the blog is “100%” sure that it will be announced and is also certain that MuyComputor is a reliable, credible source.

The Zune Phone will use the Tegra platform who Microsoft has already partnered with for their Zune HD device. It will reportedly have a 480 x 272 screen (wha?), HDMI video out, weigh around 2.45 ounces (70 grams), and will use Windows Mobile 7.

Is that a deal breaker?

Neowin reported late last month that sources at Microsoft confirmed there was no “Zune Phone”. According to Neowin, the device will be running Zune software but Danger branded, not a “Zune Phone” so to speak. Read their story here.

Read next: SeeSaw, the UK's Hulu: the review