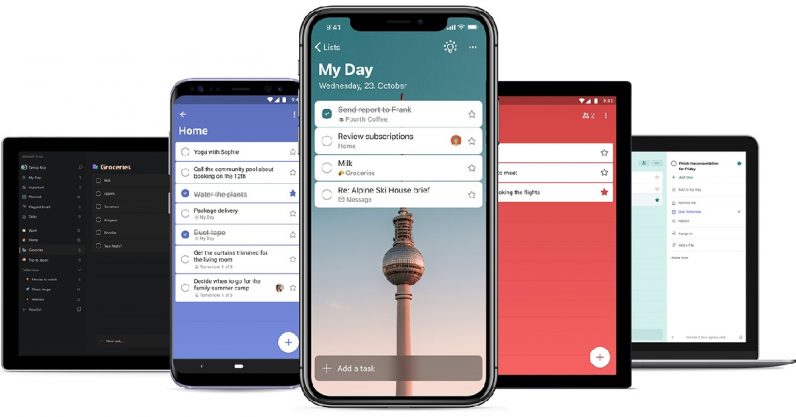 Microsoft today revealed an update for its To-Do app, now simply called To Do, that makes the app much more useful and pleasant to look at. But not everyone is happy, as the development of this app potentially signals the retirement of another.

The new version To Do includes a refreshed look with new backgrounds. The app also includes a smart daily planner, lists that can be accessed from multiple devices, and integration with other Microsoft apps like Outlook, Microsoft Planner, and Cortana. It looks a lot like popular to-do app Wunderlist, and that’s not a coincidence. The company explicitly says it built the new To Do on the back of Wunderlist, and namedrops specific features it’s bringing over from its parent app.

This might seem like a generally positive app update, but we know at least one person who isn’t happy about it: Wunderlist founder Christian Reber.

Reber said on Twitter he’d be willing to buy Wunderlist back to avoid its shut-down, and to oblige the people who still use it. This isn’t the first time he’s made the offer — he simultaneously said he’d love to build a new version of Wunderlist and that he’s “happy to buy it back any day” back in March. But now that Wunderlist‘s shut-down is closer than its ever been, his tweeted offers sound more serious.

Still sad @Microsoft wants to shut down @Wunderlist, even though people still love and use it. I’m serious @satyanadella @marcusash, please let me buy it back. Keep the team and focus on @MicrosoftToDo, and no one will be angry for not shutting down @Wunderlist. pic.twitter.com/27mIABncLF

Microsoft acquired Wunderlist in 2015 for an undisclosed price, and rolled out To-Do in 2017. Reber, who’d joined the company at the same time his app did, left shortly after To-Do launched. He quickly took to Twitter to explain why Microsoft was building a new app instead of simply renaming Wunderlist and calling it a day. Apparently the primary reason is that Wunderlist‘s API is built on Amazon Web Services and Microsoft couldn’t port it to Azure in a timely fashion.

When Microsoft revealed To-Do, it also frankly said it’d shut down Wunderlist eventually — though it also specified it wouldn’t do so until it’d integrated Wunderlist’s useful features: “Once we are confident that we have incorporated the best of Wunderlist into Microsoft To-Do, we will retire Wunderlist. While the name and icon may change, the team that brought you Wunderlist continues on.”

Reber outlined what he’d do if he had Wunderlist back, including upping its utility for businesses and making it free for consumers.

What I would do with @Wunderlist if I would get it back: pic.twitter.com/DYslu8mhOp

Maybe I’m old-fashioned, but if I wanted to buy my product back, maybe I wouldn’t say I’d do everything possible to make it a viable competitor for the seller’s new product. Regardless, Reber’s tweet drew the attention of many who expressed their love for Wunderlist and supported his apparent bid.

Microsoft, for its part, is encouraging Wunderlist users to migrate to the new To Do. Its press release also specifically thanks to “our Wunderlist and To Do fans.”

Read next: Meet the finalists for IBM's $200K Call for Code competition