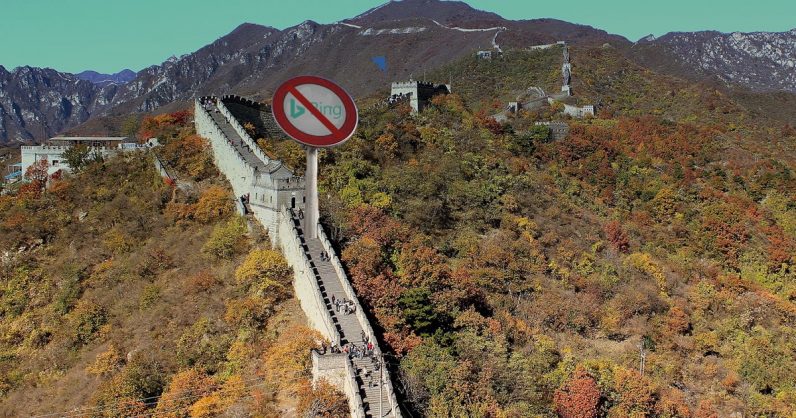 Update (January 25):  After a day-long outage, Microsoft’s Bing search engine is now accessible again, the company confirmed. It’s still not clear whether this was a government-ordered block or a technical glitch.

Last night, in an interview at Davos with Fox Business News, Mircosoft’s president, Brad Smith, said these blocks occur periodically, and the company is trying to figure out the reason behind it:

This is not the first time it’s happened. It happens periodically. You know, we operate in China pursuant to some global principles that’s called the Global Network Initiative in terms of how we manage censorship demands and the like. There are times when there are disagreements, there are times when there are difficult negotiations with the Chinese government, and we’re still waiting to find out what this situation is about.

“We’ve confirmed that Bing is currently inaccessible in China and are engaged to determine next steps,” a company spokesperson told TNW in an email statement. What’s intriguing is that even hours after the block, there’s no word from Chinese authorities about the reason for Bing being banned nationwide – not even a confirmation. According to a report by Financial Times, a person familiar with the matter said that China Unicom, one of the major telcos there, received an order from a government agency to block the search engine.

Although this is not a new trend, every time a foreign site is blocked in China, the most important and puzzling question is, ‘Why?’ That’s especially true in this case with Bing, since the company followed all the norms laid out by the Chinese government to operate its service for users there.

In 2017, China blocked Facebook-owned messaging service WhatsApp – reportedly because of its strong encryption policies – ahead of the Communist party’s congress during which it decided on the leaders that would run the country. Just a few months ago, it blocked gaming video streaming service Twitch, speculatively because some users in China abused streamers from other countries. Other major networks like Twitter and Facebook have been blocked for years.

Traditionally, Chinese authorities have taken a heavy-handed, restrictive approach towards the internet in its country, to the point it’s dubbed ‘The Great Firewall of China.’ In the last decade, it has banned major sites like Google (and its other services like Maps and Gmail), Facebook, and Twitter. In 2010, China released a white paper defending its censorship, in which it said that while the internet is “a crystallization of human wisdom,” citizens can’t attain it all.

Foreign companies operating in China have to go through stringent government checks before they can run their services in the country. Even Apple, which values customer privacy greatly, had to bow down and remove VPN apps from the country’s App Store in 2017.

Earlier this month, Cyberspace Administration of China (CAC), an official agency to oversee online content,  kicked off a program to take down content related to pornography, violence gambling, defrauding, misinformation, parody, and hate speech. According to a report from the Wall Street Journal, China has blocked nearly 773 websites and shut down 9,382 apps, under this program in the past three weeks. It’s quite possible that Bing‘s takedown is a part of this.

While StatCounter suggests Bing only covers 2 percent of the search market in China, it’s an important incident as Bing was one of the few major valley products operating in the country, and the last major foreign search engine available there. This should also make Google think about its decision to make a censored search engine tuned for the country. Beyond the concerns about building a service that adheres to government pressures to censor content, Bing’s sad fate shows there’s no guarantee that even a China-tuned product won’t be booted offline at any time.

Read next: The West’s unconscious bias against tech in Afrika limits innovation