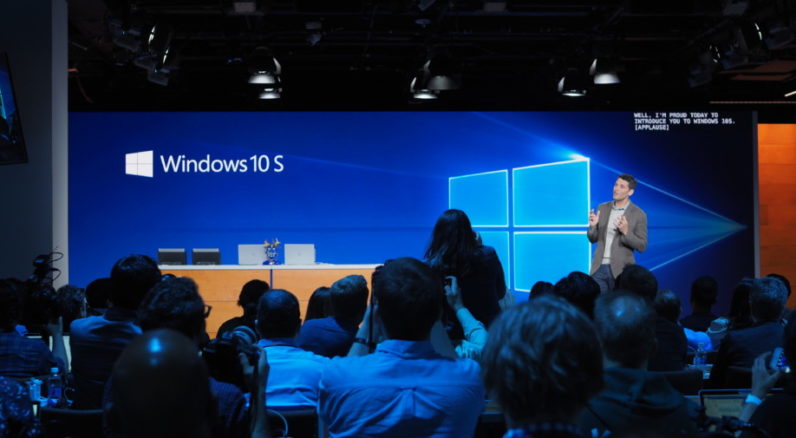 Windows 10 S was met with a hefty amount of skepticism upon launch – some of it from TNW itself.  How could it not? On the surface, it recalls many sore memories of Windows RT. Once again, Microsoft thought the best user experience would be to limit users to software from the Windows store, a cavernous marketplace largely populated by mediocre apps.

But this time, Microsoft might actually be right, and Windows 10 S deserves a chance.

Windows 10 S isn’t as limiting as you might think

Windows 10 S gets a bad rap, in part, because of Windows RT. That OS could only run touch-friendly ‘Metro’ apps – which further had to be compatible with ARM processors.

Windows 10 S, on the other hand, has the crucial difference that it can run most of the old-school apps – known as Win32 programs – you’re already using. At a basic level, all developers have to do is repackage the apps to make them available on the Windows Store.

That involves a little work on the developer end, and the Windows Store imposes a few limitations on what apps can and can’t do, but it’s far from having to write software from scratch. In fact, Microsoft is surprisingly laid back about what can be on the marketplace.

Unlike in the RT days, it seems perfectly content to have developers simply transition their existing Win32 apps to the Windows Store. The company certainly hopes developers will move onto the newer and more efficient Universal Windows Platform over the years, but much of the legacy Windows catalog could already enter the Windows Store with just a little bit of elbow grease.

But of course, there wouldn’t be a point to any of this if Windows 10 S if it didn’t provide some benefits. Thankfully, there are plenty.

The first thing we must recognize is that the user experience for installing traditional. Windows apps sucks, at least by any modern standard. Take a moment to think about how you actually install apps on Windows, and then compare it to the process on your smartphone.

You probably google the app you’re looking for and/or dig through a site to find the right version for your computer. Then you have to actually open the installer and follow the steps – which are often misleading for the average user.

Do you want to install the SuperMegaDeals toolbar in addition to whatever you just download? Umm, nope.

Do you want to subscribe to a newsletter? No thanks.

Do you want the app to run at startup? Probably not.

Do I want to use the express or custom installation? Depends.

These apps often install weird drivers, mess with your registry, or leave stray files on your hard drive. The extra services they run may drain battery life or slow down performance. And even the most careful Windows users will run into some kind of problem cause by some app they installed eventually.

What’s more, you have little guarantee what you’re downloading is actually safe. The average person reading this site knows how to identify potential harmful software, but your average joe, not so much. Of course, malware can sneak into an app store too – it happens on Android – but at least the Windows Store has the power to remove harmful software almost immediately.

Contrast that all with experience on mobile devices or through the Mac App Store:

Besides we’re already used to it. Today’s younger generation has been installing apps through an app store all their lives. At some point, installing the apps the old way has to feel terribly outdated.

Add to that faster boot times, better battery life, and overall spiffier performance, and there’s little reason *not* to like what Windows 10 has to offer once the Windows Store becomes populated.

The Windows Store is empty because people are stubborn

Now don’t get me wrong; I realize that it’s ultimately up to Microsoft to make Windows 10 S succeed. The company needs to put in some hard work to incentivize developers to transition their existing apps on the Windows Store, let alone create new ones.

But that’s exactly what Windows 10 S is: a tool to make the Windows Store succeed. It’s why Microsoft made Windows 10 S the default option on its most mainstream product yet, the Surface Laptop. And in some ways, it’s long overdue.

I’m sure that in Microsoft’s ideal world, there would be no need for Windows 10 S. Developers would have simply flocked to the Windows Store from the get go, and almost nobody would be making or updating legacy Win32 apps.

But Windows is the most popular desktop OS in the world, with software permeating virtually every aspect of computing, from business, to education, to gaming, to content creation, and more. People don’t like change; if Microsoft had simply abandoned all those old apps to pave way for a new system, many would have freaked out. But part of me wonders if should have taken the risk.

Even if Microsoft does everything in its power to convince developers to create apps for the Windows Store, apps follow the users. So before you upgrade from Windows 10 S immediately, or tell you less tech-savvy friends to avoid it, try giving it a chance for a while. It’s going to take a long time for the Windows Store to become a resource people actually want to use, but we can at least help speed it up.

Read next: It's time for cameras to catch up to our smartphones