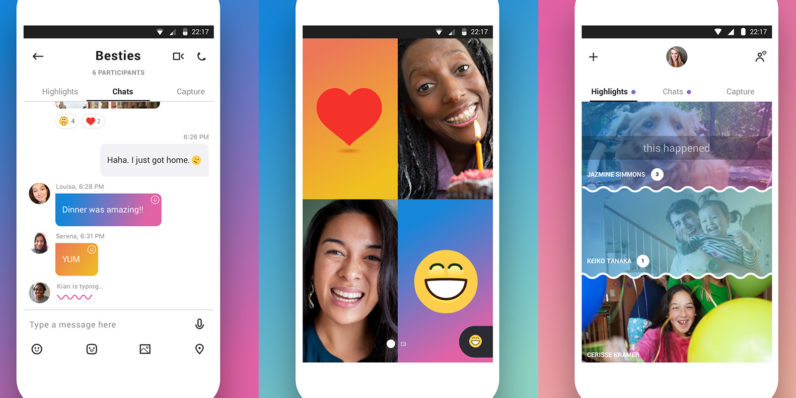 Skype is about to get a whole new look and purpose. In this new era of social media, Skype has long felt like a bit of a vestige of the past – useful when you want to have a reliable video call, but probably not your main choice when it comes to your everyday conversations. But now Microsoft is ready to update Skype for the Snapchat generation.

Starting today on Android, followed by iOS soon (and desktops a while later), you’ll see a fresh new Skype design. Open up the app and you’ll be greeted by a contact list in a lot of white instead of the traditional light blue. This is in part because Skype now lets you set your own color theme for a bit of personal pizzazz.

Aesthetics aside, you’ll see two new tabs on your contact list. The most notable change is the new Highlights feature on the left, which is essentially yet another Snapchat Stories clone.

Yeah, the Snapchat copying is kind of a broken record at this point, but Skype Corporate Vice President Amritansh Raghav tells me Highlights is a reflection of what Skype’s users have been asking for. In other words, like it or not, Stories is an established sharing format, and Skype could get left behind without some sort of facsimile.

There is one important distinction though: Highlights last a full week, instead of the usual 24 hours.

In a similar vein, a panel on the right lets you access your camera from almost anywhere in the app. You can decorate images and videos with stickers, text, and doodles, though there currently aren’t any of the AR masks we’ve seen on Facebook and Snapchat. I can only imagine that’s coming somewhere down the line.

Conversations now feature ‘Find’ tab that is a catch-all search feature that lets you search and share content from the web, or within new add-ins apps. Import GIFs from Giphy, watch YouTube videos, or buy tickers via StubHub.


Naturally, web search pulls results from Bing, but it’s an easy way to share restaurants or locations without having to leave the app. And of course, there are bots which can join in on conversations to provide quick access to information as you need it.

But video calling is Skype’s bread and butter, and the changes there are ultimately what may come to define the platform in the years to come. Instead of the usual plain video feeds, Skype wants your video conversations to be just as useful and emotive as your text ones.

You can now share photos right on the video stream, for example, if you want to share a memory with your family without interrupting the conversational flow. Meanwhile Participants can use a variety of Facebook-like reactions for bit of extra flair.

In the future, you’ll also be able to share videos within a video call, making it easy to collaborate on work or simply enjoy a video together with friends – and Skype hints more features are yet to come.

None of these feature are going to turn Skype into the next Snapchat, but Raghav says that’s not what Skype is trying to become. Instead the focus is on your “personal network” – the relatively small group of people you need to interact with in a more engaging manner than a simple Facebook like.


There’s some merit to that focus. While the new features help bring Skype to parity with the competition, it’s noteworthy Skype has remained as popular as it has. I think that’s in part because calls – and video calling in particular – tap into something a bit more personal than your average social network. A long distance call with a partner, voice lesson with a singing teacher, or catching up with family members are all a bit more personal than your everyday interactions on most social media.

Of course, Skype is far from the only one to do video calling nowadays, but it still does it better than most. I hope improving on the calling experiences continues to be its long-term focus; while the rise of Snapchat may have forced it to mimic the competition, it’s by appealing to its core strengths that Skype can keep its place in an increasingly crowded market.