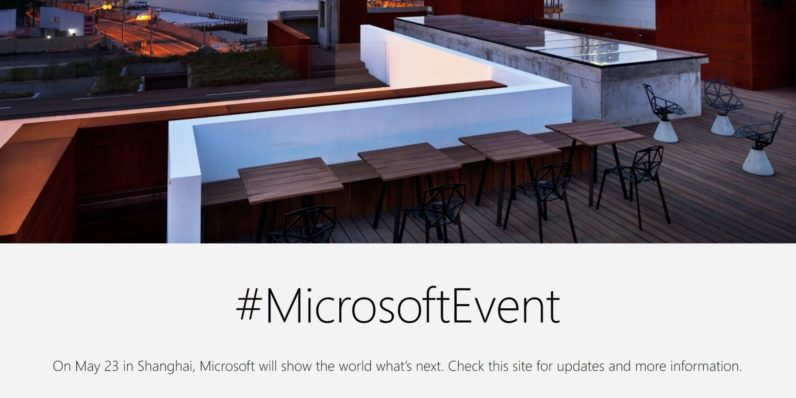 Microsoft sure is keeping tech journalists busy. Following its big event this week where it revealed Windows 10 S and the Surface Laptop, and then its annual Build conference next week, Microsoft is hosting yet another announcement event on May 23rd – this time in Shanghai.

For those keeping track, that’s three events in one month. Unfortunately, the company isn’t providing any hints about what it may be announcing, other than the most generic of captions:

On May 23 in Shanghai, Microsoft will show the world what’s next.

That’s extremely vague, but the invite is styled in the vein of previous hardware announcements. Most curiously, Panos Panay tweeted about the event with a suspicious Surface hashtag:

Could the company really be announcing another Surface product mere weeks after the Surface Laptop? And in Shanghai instead of the usual New York event?

Then again, the Surface Pro 5 is rumored to be a mild update to the current model – probably just an update to Kaby Lake processors – so maybe a surprise Shanghai announcement wouldn’t be such a big deal.

Another option is an update to mixed reality. In December, Microsoft added Chinese manufacturer 3Glasses to its roster of partners creating VR headsets during its WinHEC conference. At the time, the company announced it would deliver a VR headset in the first half of 2017, so the timing seems ripe. But that wouldn’t explain the Surface hashtag.

Of course, this is all just speculation, and maybe it’s not even hardware at all. Hopefully we’ll get more hints once Build rolls around next week, but in the meantime, Microsoft is promising updates on its event site.

Read next: YouTube taps Kevin Hart and Ellen to create original shows you can soon watch for free