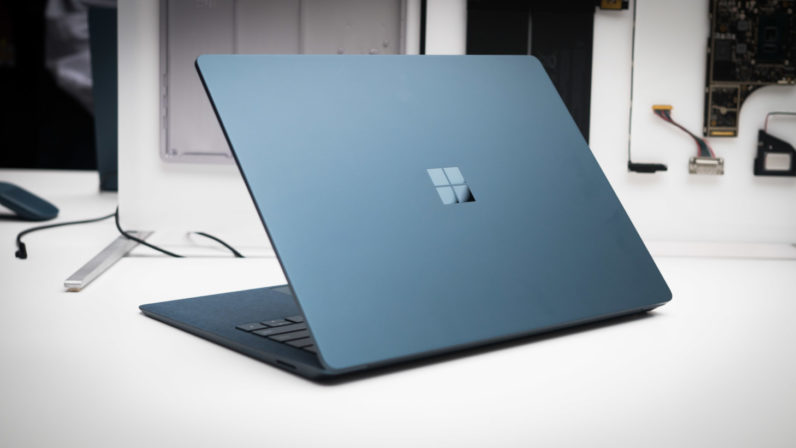 Microsoft today unveiled the Surface Laptop, the brand’s first PC that doesn’t shape-shift into a tablet of some sort. It runs on Microsoft’s new power-optimized Windows 10 S, and I’m not exaggerating when I say it’s the most beautiful laptop I’ve ever seen.

I absolutely love the Alcantara material used on the inside of the laptop. It looks stunning in person, and feels even better. After so many years of using all-metal laptops, one forgets that aluminum isn’t actually a comfortable material. Other manufacturers, take note.

Moreover, Microsoft somehow managed to make it blend seamlessly into the metal that makes up the rest of the laptop’s frame, which comes in four colors: Cobalt Blue, Burgundy, Graphite Gold, and Platinum. I’m a big fan of the blue and red in particular, which are a great change of pace from the tired (and Apple-dictated) gold, dark grey, and silver. Unfortunately, the cool colors are only available on the Core i5, 256GB configuration. Those who want a maxed-out system will have to stick with Platinum. 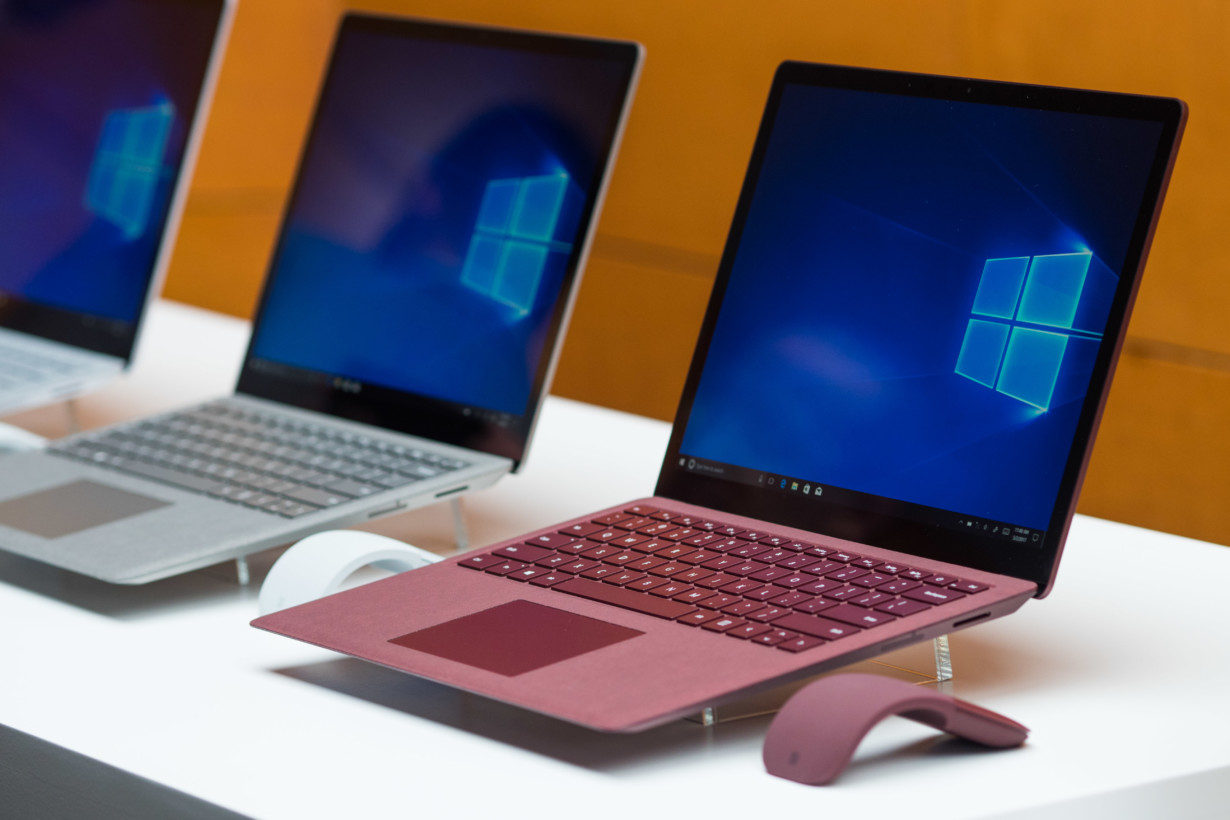 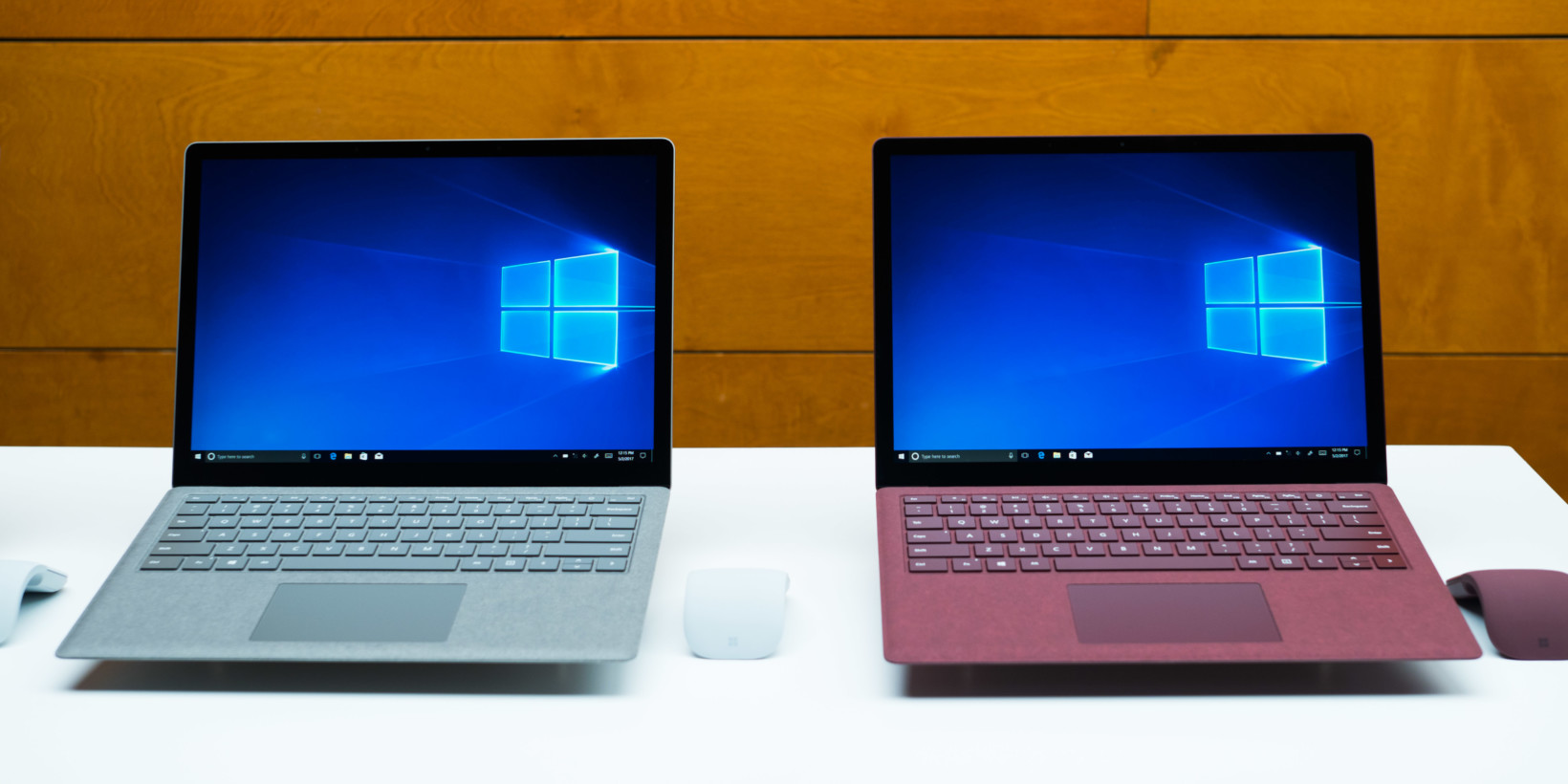 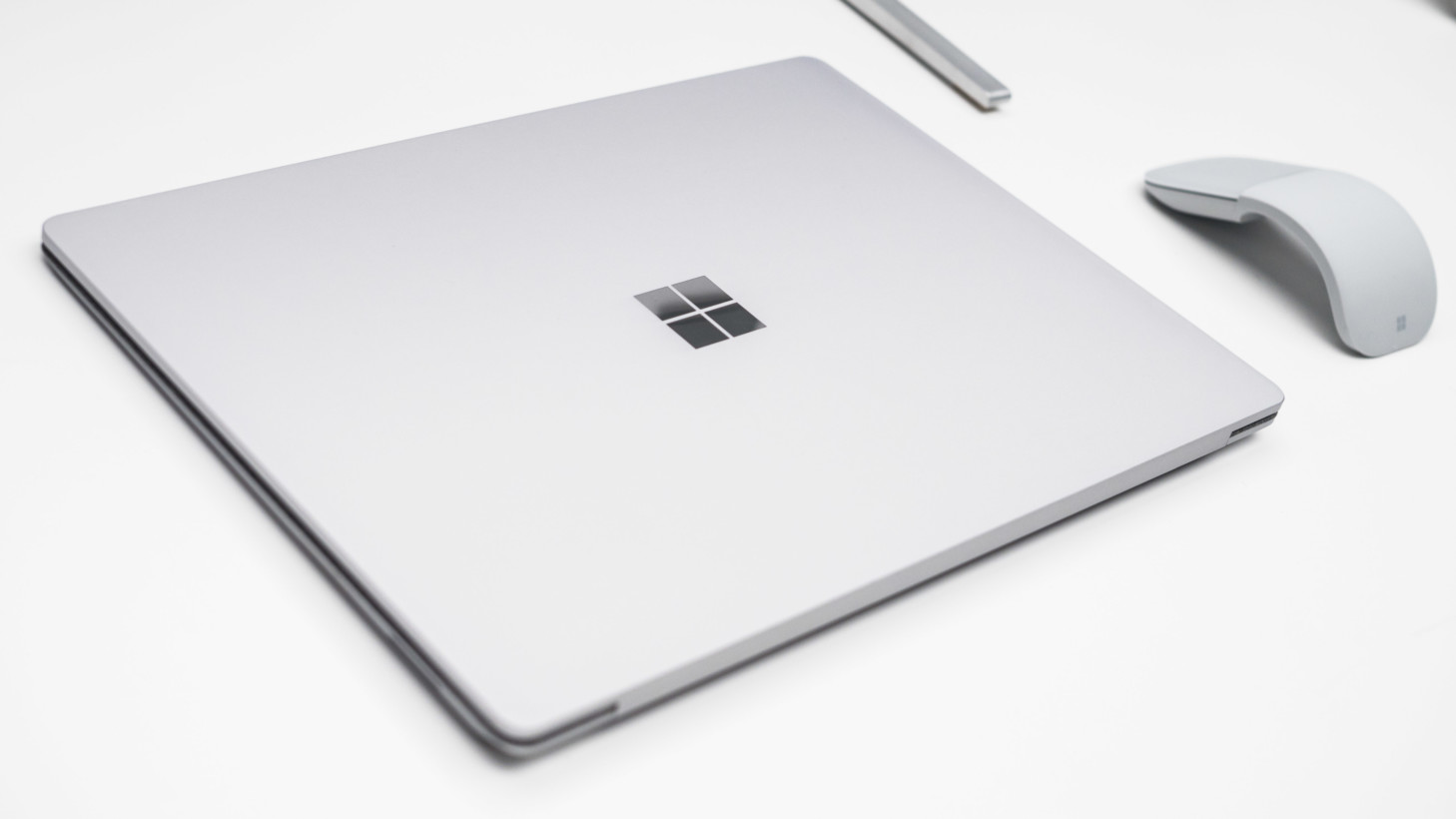 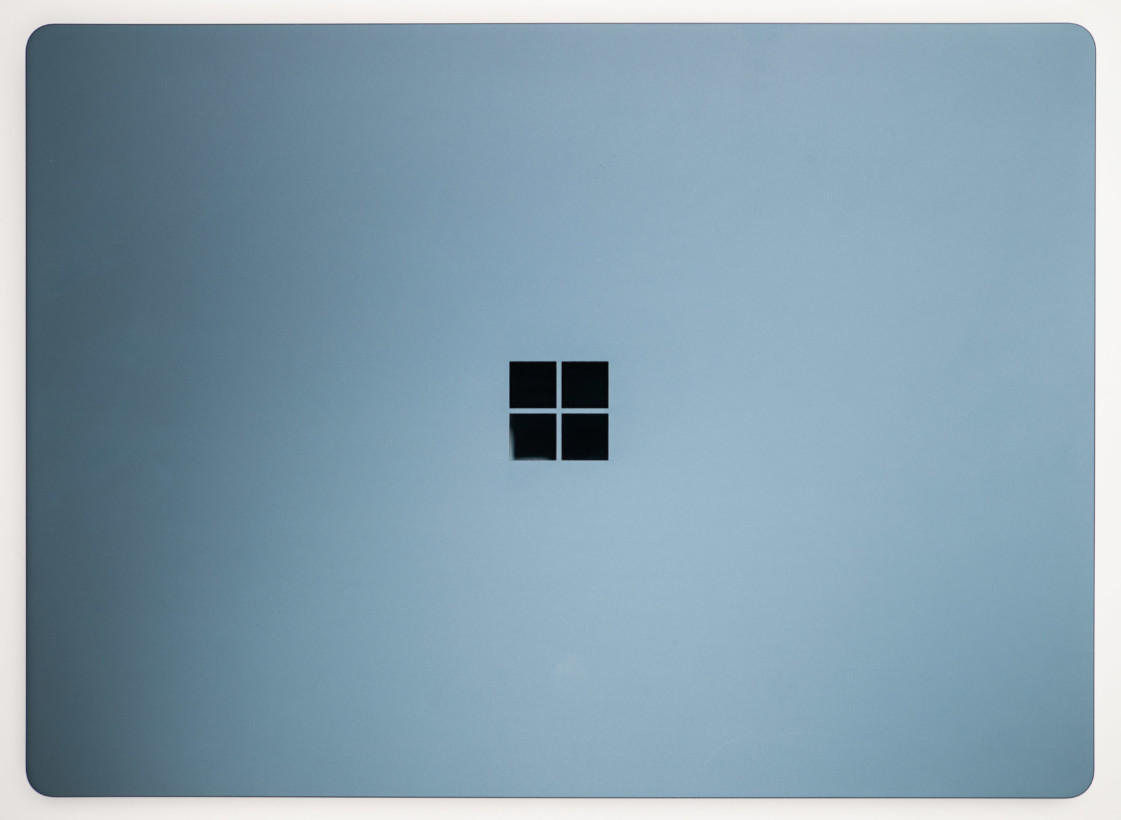 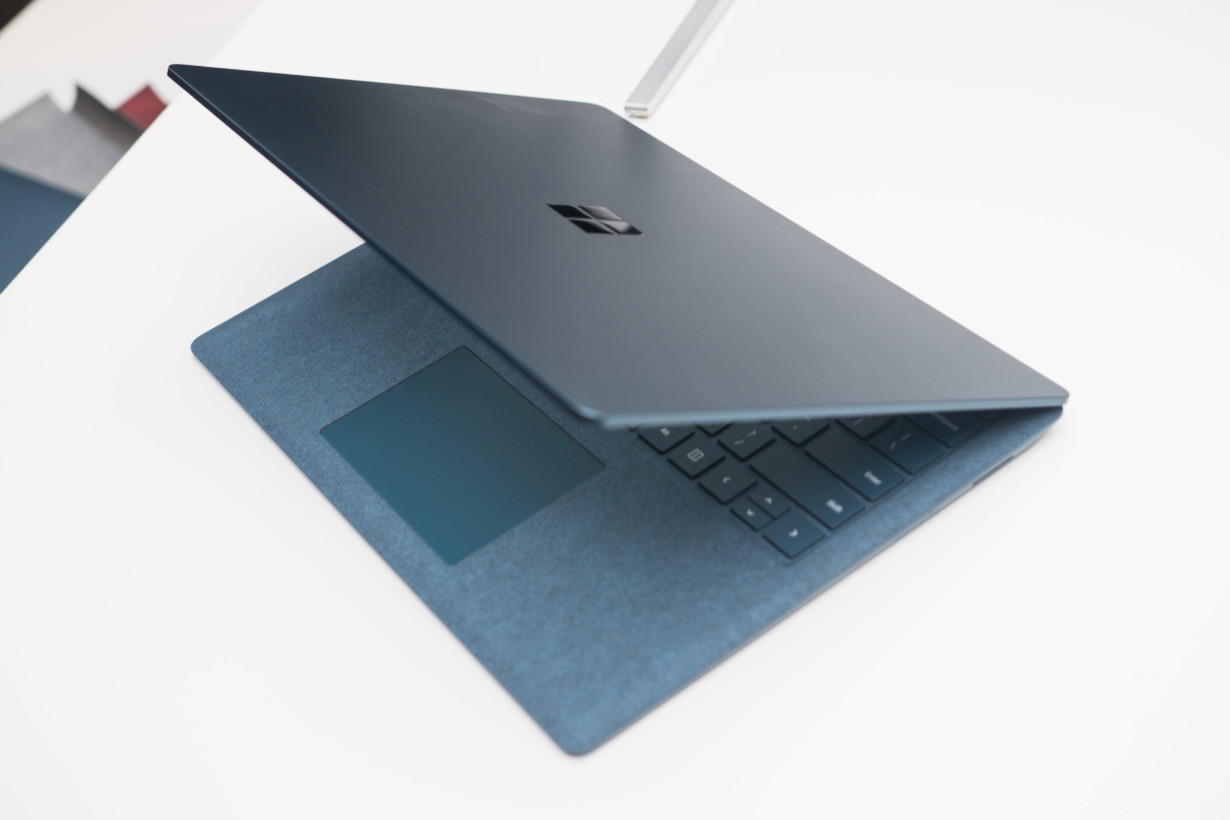 Also, as much as I love the looks, I can’t help but feel a tiny twinge of disappointment the laptop doesn’t have any sort of tablet convertibility. It feels like a bit of a letdown to long-time Surface fans. Even a rotating hinge like the Lenovo Yoga would’ve sufficed.

Still, it’s not like the tablets are going away; Microsoft is simply giving us more options. The company proved the convertible model works with previous Surfaces – now it’s trying to prove it knows how to make an ultra-mainstream laptop as well.

And despite my aversion for traditional laptops (I use the stylus too often) I can’t help but want one. The Surface team has been making beautiful products for years, but with the Surface Laptop, it seems like Microsoft has officially stolen the design crown from Apple.

It’s more than just a pretty face though. The laptop is lightweight at 2.76 pounds, despite the generous 13.5-inch screen. The hinge opens smoothly with one hand, though I wish it at least laid flat for using the Surface Pen.


The keyboard and trackpad feel very similar to the ones of the Surface Book, perhaps even a little improved. And while was too crowded to get a good sense of the Dolby-powered speakers, they sounded quite good from what I could hear.

Then there’s the display, which was  bright and saturated. At 201 PPI (2256 x1504), it’s a little lower than the Surface Book and Pro 4 (both 276), and a bit under the 221 PPI of Apple’s MacBooks, but you’re not likely to notice much of a difference from the usual viewing distances – I certainly didn’t. Colors and contrast seemed just as good as you’d expect from a premium device, and the slight resolution sacrifice is a worthwhile battery-saving measure.

As for what’s inside, here’s a full run-down of the specs, which we cover in our announcement post:

Those specs are right up there with some of the most powerful configurations of the Surface Pro and Surface Book, so performance shouldn’t be an issue – the Iris Plus 640 graphics on the i7 model might even be able to game decently at low settings (it’s just a little weaker than the Nvidia dGPU on the original Surface Book). Microsoft says it’s faster overall than the new 13 inch MacBook Pro, while providing significantly more battery life. And if even half of that 14.5-hour battery claim holds up for real world use, I’d be impressed.

But while there’s a lot to like about the Surface Laptop, I have my reservations too.

Windows 10 S seems… okay? The laptop was smooth in my brief time with it, but I’d expect that of any Windows PC with a fresh install. Microsoft made a lot of promises about its power optimizations and speed improvements; given apps are limited to the Windows Store, that’s certainly believable.

But until we try out the OS for an extended period of time, we can’t be sure how much better it is than simply running Windows Store apps on Windows 10 Pro. Microsoft will also have to work hard to get more apps into the still-paltry Windows Store. It announced today that the full desktop versions of Office and Spotify are coming to the store, but there are still too many apps I use that I’d have to install the old way.

That said, you will be able to upgrade to Windows 10 Pro for free until the end of the year should you need that extra flexibility, but if everyone just ends up switching to the more powerful OS, what’s the point?

I also can’t wrap my head around the lack of a USB-C port. It’s 2017, and that just seems absurd.  A representative told me that they didn’t want people to have to use dongles, but I would’ve gladly sacrificed the Mini DisplayPort or even the proprietary Surface Connect interface (the one in the charger) for a Thunderbolt 3 port with an adapter. Mostly, I want to be able to charge my laptop and phone with the same cable, gosh darn it!

Then there’s the price. Though today’s event was largely focused on competing with Chromebooks, at $999, the Surface Laptop seems more poised to fill in the gap left by the MacBook Air.

Think of what made the Air so successful among college students: it was beautiful, incredibly portable, reasonably priced, could run a full suite of desktop software, and had excellent battery life. The Surface Laptop aims to deliver all this and more. If Windows 10 S can live up to its promise – and that’s a pretty big ‘if’ – college classes might be full of Windows logos instead of Apples.

The Surface Laptop is available for pre-order now, and starts shipping June 15.