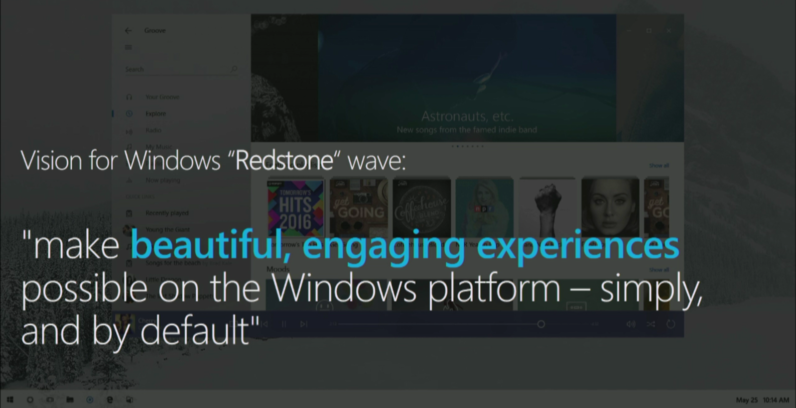 Back in January, we reported on a leak showing off a purported major design refresh for Windows 10, dubbed ‘Project NEON.’ Today, Microsoft essentially confirmed those leaks during a presentation at its Windows Developer Day event.

The image shown above was included as a slide during the presentation and heavily resembles the earlier leak. It was a sly way of confirming the new look (first caught by the folks at MSPoweruser, who were the first to leak Project NEON as well) without actually showing it off in any major capacity. For comparison, here’s an image from the leaks:

The UI refresh includes a new ‘Acrylic’ component that appears to basically be an upgraded take on the old Vista-era ‘Aero,’ for blurred UI elements and background apps. It’s rumored to arrive in yet another major update to Windows 10 slated to arrive later this year codenamed Redstone 3. Personally, I think it’s a welcome improvement towards making Windows 10 a little more visually interesting. Now, if only I didn’t have to two different apps for Settings and the Control Panel….

Of course, there was plenty of official news from the Developer Day event, including improvements to the Universal Windows Platform, UWP game availability on Xbox, access to the Cortana Skills kit, a new tool called Project Rome for cross-platform app activity, and more. Head on over to the Windows Blog for more on the news.

Read next: Netflix has a Castlevania series in the works for later this year