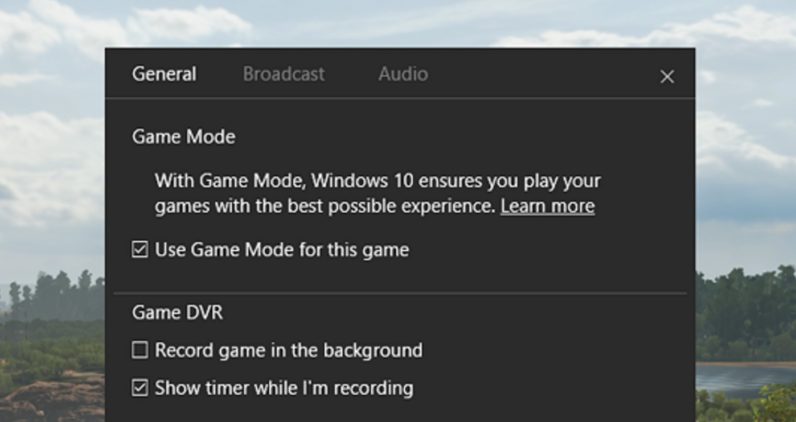 Microsoft caught PC gamers’ attention when it quietly announced that it would be introducing a performance-boosting ‘Game Mode’ in the Windows 10 Creators Update. But you won’t have to wait that long: the latest preview build of the OS (15019) will let you try out the feature right now.

The idea behind game mode is simple: re-prioritize your computer’s CPU and GPU resources to maximize gaming performance. Your computer will spend less energy worrying about background tasks and more time devoted to your game.

In other words, your PC is becoming more like a console – and that’s actually a good thing.

According to an interview with PC Gamer, Microsoft says it will bias GPU cycles to your game, and make sure that your CPU performance isn’t inhibited by competing background tasks. Kevin Gammill from the Xbox team says “essentially what we’re doing with Game Mode is allocating a number of threads that will be for the game only, and the rest of the threads for the system only.”

What does that mean in terms of your frame rates? At first glance, not that much: Microsoft expects a 2-5 percent increase in frame rate, according to Ars Technica, depending on the game and your system’s configuration (though Microsoft plans to continue optimizing the feature).

But maximum frame rates aren’t the whole story – or even the most important part. Many gamers – including your truly – will tell you that dropped frames and inconsistent performance are much worse than low frame rates (to an extent).

I mean, did you know Ocarina of Time ran at only 20 fps on the Nintendo 64? No one complained about that, because it was a consistent 20 fps.

Game Mode should hopefully keep your frame rates high and consistent, so that you don’t get a random performance drop whenever a background application decides to kick in on a whim. This will be more noticeable

You’ll be able to activate the feature two ways. First, there’s a new ‘Games’ section in Settings, where you can toggle it on or off. Microsoft is building a whitelist of games approved to use the feature.

Alternatively, you can press ‘Win+G’ while a game is running in the foreground. That pull open the game bar, from which you can slick the Settings button and activate Game mode manually for that title.

There are some considerations to keep in mind. Sometimes you don’t want a background task to be limited (maybe you’re trying to stream, or are running some other important process), in which case you’ll want to turn the feature off.

Microsoft says it’s working on addressing such concerns, but for now, Game Mode sounds like a much welcome step in the right direction. For more on Game Mode and multiple other features in the latest Insider Update, check out Microsoft’s blog post at the source link below.

Read next: Zuckerberg to Trump: 'We are a nation of immigrants'