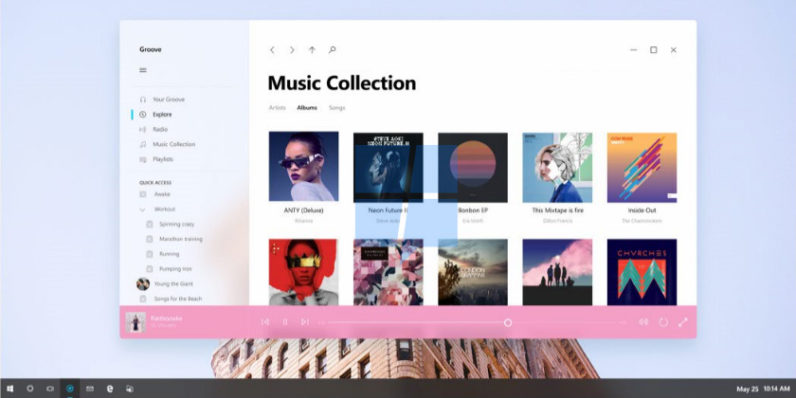 We heard last November that Microsoft was working to overhaul its design language for Windows 10’s interface as well as for first- and third-party apps on the platform. Now, MSPoweruser has obtained leaked images of that program, dubbed Project NEON.

It’s more iterative than wholly revolutionary, building on the clean and content-focused Metro design language first seen in Windows 8 and the current Microsoft Design Language 2 (MDL2) currently in use on Windows 10.

There’s still a major emphasis on text and images over interface elements, but also a view to improve consistency, as well as to introduce more refined animations across the board.

In addition, a new component called ‘Acrylic’ will see unfocused elements like the desktop background, and apps’ sidebars and navigations become blurred and translucent, so as to highlight the content that’s important to you.

MSPoweruser notes that you can see a bit of what these animations might be like in the Microsoft Groove music app, which you can see in the GIF below (watch how the album art shrinks when you scroll down the track list).

The new design language will also accommodate interactions in 3D and with the HoloLens mixed-reality headset by highlighting visual elements as you focus on them with your cursor or your gaze.

The proposed minimal changes, which are tied to functionality and context, seem to make sense, especially given that Windows 10 presently doesn’t look dated – it just needs a bit more polish and consistency.

Project NEON will reportedly be implemented later this year in an update codenamed Redstone 3, which will follow the Creators Update (aka Redstone 2) that’s releasing in April.

This is Project NEON, the upcoming incremental upgrade for Windows 10’s design on MSPoweruser

Read next: Google Calendar wants to help you lose all that holiday weight with new fitness features