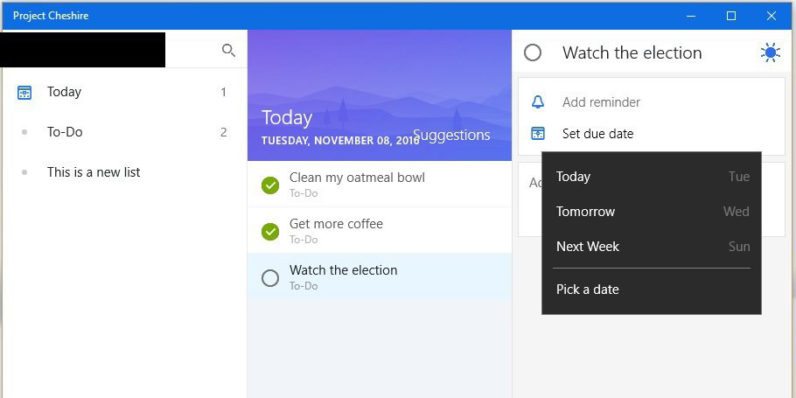 Back in May, MSPoweruser got a preview of Project Cheshire, a to-do list app that Microsoft has been building. Thurrott.com now reports that the tool has got a major update and is in private beta.

Since the first time it was revealed, Project Cheshire has arrived on Android and iOS, and is also available as a UWP app. As with other such tools, it lets you create multiple lists, set reminders and sync your to-dos across your devices.

That’s all well and good, but what I’d like to know is why Microsoft is busying itself building a new to-do app when it already owns a perfectly good one.

The company acquired Berlin-based task manager Wunderlist back in June 2015; the app reported 13 million users at the time and has since added more functionality and become available in the Windows Store, while already supporting iOS, Android and Web users.

It also does a whole lot more than just list your tasks: You can share files, delegate items to people and discuss them and publish lists on the Web.

Whether or not Wunderlist is perfect is a matter of debate, or rather, a matter of choice. There are tons of to-do apps out there and they suit different kinds of users with different needs. However, if Microsoft is going to throw its hat into the ring, it better be prepared to fight a difficult and bloody battle.

Most to-do apps on the market right now have been around for years and have gone through loads of changes, adding and removing features, streamlining interfaces, and fighting hard to woo users away from incumbents – Wunderlist included.

As Thurrott.com notes, It’s possible that Project Cheshire is the next phase of Wunderlist – but in that case, it seems like an awful lot of unnecessary reworking for a tool that already does what it says on the tin pretty well. Sure, there might be room for an app with a radically different approach, like this one for Android designed by a teenager, but Project Cheshire seems to be just another list manager at present.

Hopefully things will change by the time Project Cheshire is ready for public release. We’ve contacted Microsoft to learn more and will update this post if there’s a response.

Read next: Lenovo is ditching its own brand name to make way for 'Moto'