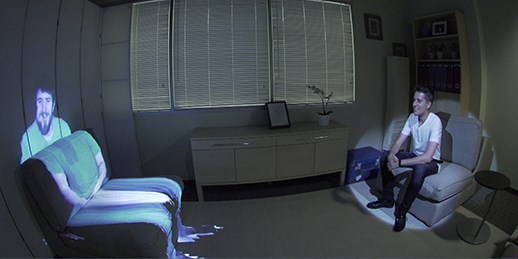 Microsoft’s research arm is working on an innovative way to make video calls feel less awkward. The team is using Kinect cameras and projectors to capture an image of a person in 3D in one room and project a life-size version of them in another room onto a chair.

According to the researchers, each person can then see a digital image of the other with the correct perspective, look at them from different angles and interact with them.

The idea behind the Room2Room augmented reality setup is to make you feel like you’re hanging out with another person and converse more naturally.

The research team tested this claim by having seven pairs of study participants build three-dimensional shapes with blocks. One person sat in front of a table in one room with the actual blocks, while their partner sat in another, giving instructions for what kind of shape to construct.

The result? Test subjects took four minutes to solve the puzzle when they were actually face-to-face, nine minutes when they used Skype to video chat and seven minutes using the Room2Room system.

The team used Kinect depth cameras from Xbox consoles along with projectors and concepts from a previous project called RoomAlive, which aimed to create an augmented reality gaming arena in a room.

Room2Room isn’t yet ready for mainstream use because it requires bulky hardware and doesn’t yet produce high-resolution projections.

But it’s a step in the right direction for better video calling: VR headsets like the Oculus Rift as well as Microsoft’s mixed-reality HoloLens could support Room2Room well, and we might soon look forward to less awkward remote communication in the near future.

Read next: Twitter is down for some users around the world [Updated: It's back!]