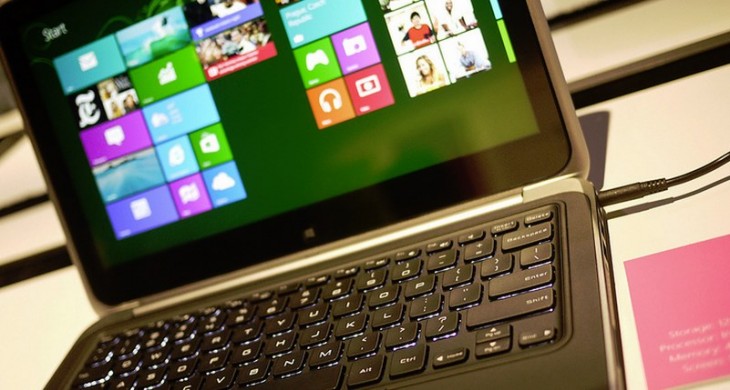 TNW sat down with Microsoft’s Tami Reller, Chief Marketing Officer and Chief Financial Officer of Windows, to discuss the progress of Windows 8 since its launch, and to look ahead at what to expect in the coming Windows Blue updates to the operating system.

The big number: 100 million. That is the number of Windows 8 licences that Microsoft has sold since it became generally available. The company reported that it had sold 60 million licences in early January. According to Reller, the “vast majority” of the new 40 million sold copies of the operating system shipped on new PCs, as the company’s promotional period for Windows 8 ended since it last updated the market.

The 100 million figure isn’t a surprise. Before TNW’s meeting with Reller, I compared market share figures in January, and the end of April, extrapolated against early sales metric, and estimated on the first of May that Windows 8 had sold 95 million copies. Close, but I remain cigarless.

In our discussion, Reller showed a chart that tracked weekly sales of Windows 8 – sadly there was no label on the y-axis – showing what appeared to be a mostly stable sell rate. Christmas was a spike.

In a short interview that the company shared with TNW, Microsoft reiterated the fact that 700 million Microsoft accounts exist. The company also today announced that SkyDrive has 250 million active users.

This is all prelude, let’s get into it.

Windows Blue cometh, and it could be precisely what Windows 8 needs. While there is much promise to Windows 8, it remains a quirky operating system in which much of the new user interface elements do not perfectly allign; this creates friction, and user confusion.

In Reller’s estimation, Blue “continues the Windows 8 vision.” The update will “address customer feedback,” which sounds promising, as the firm as has received – if it manages to filter properly – quite a bit of good notes from users.

It will also help “traditional” PC users transition to the new operating system. By that the company means folks not using Windows 8 in a touch environment. Windows 8, it is known, is far better when it can be interacted with in conjunction with touch; the Start Screen is hard to employ in a mouse and keyboard environment, or, god forbid, on a non-touch laptop.

According to Reller, “all ideas that have percolated through the mainstream press are things that have been considered.” The company is watching is telemetry, it assured TNW. Another core point of Blue will the helping of users best the learning curve that has bedeviled many.

Blue will help users “get comfortable with the [operating] system more quickly,” according to Reller.

The company is proud of the 793 updates that it has shipped since general availability to Windows 8. I am unsure how they came to that figure, but the company wants you to know that it is moving in real-time to improve its operating system. To that end, Reller stated emphatically that Blue is not the end of Windows 8 updates.

Windows Blue has a key skill: it “introduces more device options.” Put another way, Windows 8 is heading downmarket to 7 and 8 inch devices. The rumors were true. Desktop zoom, scaling that is, may be turned on my default in Blue on small screens, making using the non-Start Screen environment a better experience when pixel-constrained.

What will those devices cost? At launch, the low $300-range, in line with what Apple charges for its iPad Mini. Expect mild declines in price over time, but not too far; Windows 8 has a cost to OEMs. To my knowledge, while Microsoft is certainly hard at work on the next generation of Surface – Reller naturally didn’t tell me that – I have heard nothing indicating that the company is working on smaller devices itself.

The sales figure, Blue news, and hardware notes are the big points that you need to know about now. However, Microsoft shared a few other details about the code that are worth noting. Stay with us.

In its view, “customer satisfaction on Windows 8 with touch” is strong. This is precisely why the company is hellbent on shipping more touch-enabled devices. “Customer satisfaction to Surface hardware” has been positive, in its estimation. But new hardware is needed. The “tablet and touch assortment” is too low, and needs “ramping.”

To help consumers find the right device, the firm needs to improve its sales experience, according to Reller. This is correct, and it is heartening that the firm is working to solve its long-standing last-mile problem.

Microsoft remains deeply invested in the Surface, and has “confidence” enough in the device to expand its reach to new markets; if you thought that Microsoft’s time as an OEM might be short, you are wrong. The sales surge that the Surface Pro gave to the Surface line at launch is being seen repeated in new markets where it lands, according to Reller.

Strategically, the company is looking to lower the delta between touch and non-touch machines, to the point that consumers on a budget are comfortable buying touch-enabled systems, allowing them to get far more out of Windows 8.

Some 2,400 systems have now been certified for Windows 8, of which a “big percentage” of which are touch machines. I do hope you are catching the drift of the company’s strategy at this point. Finally, apps. There are now six times as many apps for Windows 8 than at launch, and the Windows Store has seen 250 million downloads, across 537 million visits.

All together, Windows 8 chugs along as we expect any version of Windows to do. Microsoft appears cognizant of its flaws and shortcoming, and appears focused on correcting them, as opposed to denying them. Blue will be a key step for Windows 8 to sharpen up before the holiday sales cycle. We’ll know more once Build rolls around.

Read next: Six months in, Windows 8 is selling at the same rate that Windows 7 did