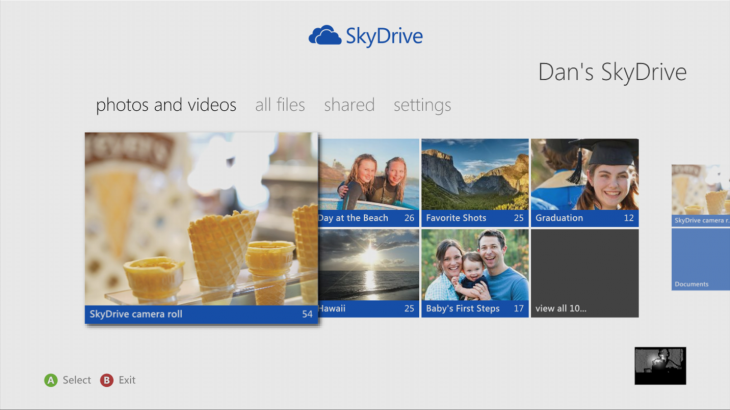 While Microsoft tries to find ways around Apple’s 30 percent cut on purchases for extra storage inside its Skydrive iOS app, the company will today expand the devices on which the service will be available, launching a dedicated Skydrive app for the Xbox 360 at 10am PST today.

The launch is part of a wider app rollout which will see 40 additional partners bring content to the Xbox dashboard. Around ten will begin going live from today, launching across the week, and then 30 more by spring, bringing the total number to well over 100 apps.

The app will bring photos, videos and other files directly to the console, adding to Microsoft’s apps on the PC, Mac, smartphones and tablets. With Xbox integration inside Windows Phone, images will now be instantly synced to the Xbox, should you want to show friends and family on the big screen.

The new app supports Kinect voice controls and gestures, making it easier to swipe between images or control your media files.

When the app goes live, head to your Xbox Apps section, hit the social category and choose Skydrive. The rest will take care of itself.