Bing users in the United Kingdom and Australia will be able to see some movement on their Bing homepage, thanks to the service’s new video backgrounds, according to a report by WinRumors. 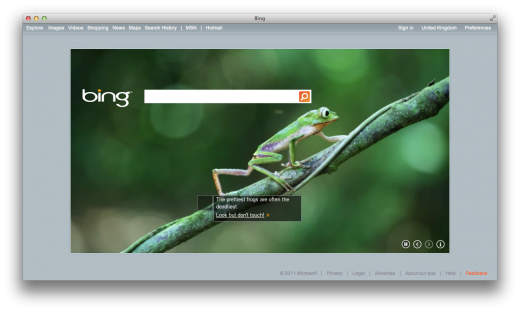 The new feature has been live in the United States since September this year and if you go to the Bing homepage for either of those countries right now, you can see a beautiful white lined leaf frog as it walks across a branch at Manu National Park in Peru. Careful not to touch it though, because “the prettiest frogs are often the deadliest”, the search engine informs us in an overlay.

When the feature was first unveiled, the company said that it was US-only and would be introduced to other countries in the coming months. “We won’t be programming a video every day, just when the mood strikes us,” the blog post said, adding that visitors to the Bing homepage in other countries still get to see a still shot of the frog crossing the branch. The video requires HTML5 capabilities, which are included in recent versions of all popular browsers.

What’s the point, you might ask? It’s just to add a little bit of life to the already vibrant Bing homepage and get users more interested in the search engine. We found the little info bubbles with links to more detailed articles and videos particularly insightful, and expect to see it rolled out in other countries soon.

Read next: AT&T Says iPhone Customers Are Sticking With Them, Despite the Competition