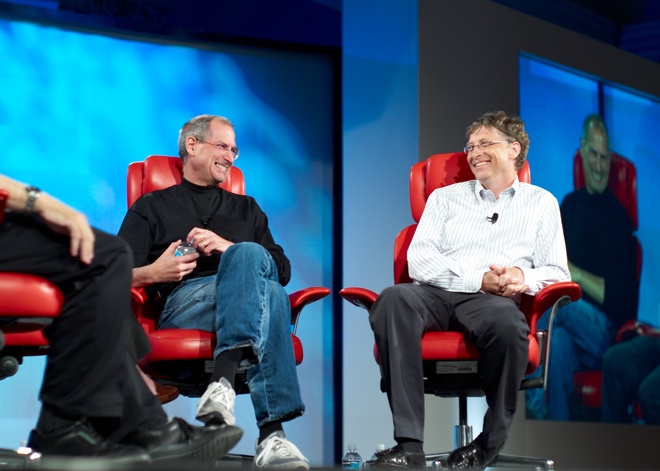 Responding to criticism that Steve Jobs levelled at him in his biography, Bill Gates said in an interview on ABC’s “This Week” that “none of that bothers me at all” and even termed Jobs’ accusations “very understandable”.

Steve Jobs was famously blunt and could be scathing in his critique. In the introduction to his biography, the author Walter Isaacson notes that the Apple co-founder was candid in his interviews with him and did not want the facts or his opinions obfuscated or sugar-coated in any way. It’s not surprising, therefore, that his description of Bill Gates went like this:

Bill is basically unimaginative and has never invented anything, which is why I think he’s more comfortable now in philanthropy than technology. He just shamelessly ripped off other people’s ideas.

Bill Gates, however, was much less critical of Jobs in the interview. Whether because he did not want to speak ill of the man after his death or just because he’s more diplomatic about his public discourses, the Microsoft co-founder said that Steve “did a fantastic job” and that he was glad that they got to work together.

Steve Jobs did a fantastic job. When you think about why is the world better today, the Internet, the personal computer, the phone, the way you can deal with information is just so phenomenal.

Over the course of the 30 years we worked together, you know, he said a lot of very nice things about me and he said a lot of tough things. We got to work together. We spurred each other on, even as competitors. None of that bothers me at all.

Perhaps the former Microsoft leader is just more polite, after all, and really is unfazed by Jobs’ criticism of him. He even tried to reason why Jobs might have felt that way about Gates, although this part does sound a little more condescending than he may have intended:

He faced, several times at Apple, the fact that their products were so premium priced that they literally might not stay in the marketplace. So the fact that we were succeeding with high volume products, you know, including a range of prices, because of the way we worked with multiple companies, it’s tough.

And so the fact that … at various times, he felt beleaguered, he felt like he was the good guy and we were the bad guys, you know, very understandable.

It seems that the revelations in Jobs’ biography were neither new nor surprising for Gates and, as far as he’s concerned, it is water under the bridge. The important fact, in our opinion, is that both Jobs and Gates have achieved amazing things in their respective lives, which themselves have been deeply intertwined. The world is a better place due to their contributions to it.