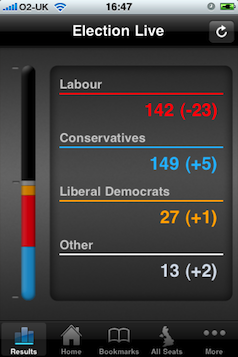 We already brought you the news of the upcoming Windows Phone 7 features, but now we have screenshots to share, and we could not hold back from bringing them to you.

While they are not as detailed as we had hoped, each will shed light on just what Microsoft is cooking, just in case you are not at the Mobile World Congress or watching the live stream. Without further hyping, let’s get into the images:

Sure, Internet Explorer 9 is nice on your desktop, but Microsoft wants to bring HTML5 to its mobile world, and that means that IE9 needs to make the leap out of the PC and into the phone. The screenshot below tells us very little, but it appears to be IE Mobile 9 running a browser test on the phone.

The Twitter app for WP7 is decent, but not Tweetie (if you remember that), so any extension of its capabilities are welcome. Twitter will be, in the future, baked into the ‘People’ hub just like Facebook. Excellent if you follow about 12 people, we’ll have to see how the noise works if you follow more.

In the words of our own Matt Brian: “Windows Phone 7 devices are also to receive support for Microsoft Office documents in the cloud.” Indeed. Whether or not you actually ever attempt to use Word on your phone, more capabilities are on the way.

There was no image of it for us to share, but you should also keep your eyes peeled for “additional multitasking capabilities.”

And of course, don’t forget that Copy/Paste is coming out in the first two weeks of March and Sprint and Verizon WP7 handsets are due in the first half of 2011. Also, Microsoft is touting a slew of Xbox Live games for the mobile platform including Full House Poker, a nice attempt, but nothing as good as Full Tilt for Android.