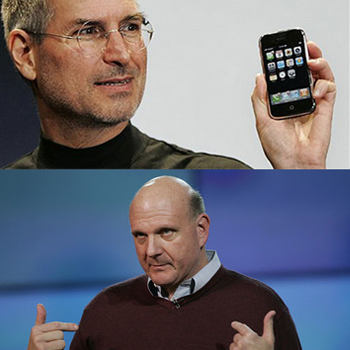 they introduced Ping – a social network for music that lets you follow users/artists and comment on their activities. The other important announcement Apple made was about Game Center going live soon.

Over the past few days it has been interesting to follow the event’s coverage because you know who has both these services ready and live for their mobile platform? Not Android, take another wild guess, not Palm either… It’s Microsoft.

Zune Social lets you create your own circle of friends and share your music preferences with the web at large, and it has been around for quite a while. Then there’s Xbox LIVE. Neither offerings from Microsoft have been considered as reason for iTunes Ping or Game Center.

Apple did not create a Facebook meets Twitter meets iTunes since it was a magical way to make people buy music, they wanted to make sure Microsoft did not claim a social one-up. Game Center did not come out solely because iOS is the best selling portable gaming platform. Apple realized that users enjoy competing with their friends and score themselves, Microsoft had this as another potential USP with Xbox LIVE for Windows Phone 7.

The wide-spread existing Xbox LIVE community and the Zune Social user base Microsoft has is significant to their mobile strategy, Apple decided to do something about it.  GigaOm calls Ping the future of social commerce, well with all due respect, this future has been around for quite some time.

In Apple’s favor, the collective wisdom of the Internet seems to have avoided mentioning Windows Phone 7 as the catalyst for Apple’s new services. I say Windows Phone 7 was the primary reason why Apple launched them. While Jason Calacanis might be right in saying Jobs created Twitter and Facebook in his spare time, the motivation wasn’t to “eat Zuck for breakfast”. It was to ensure that Apple had a reply to Windows Phone 7’s strengths.

Jobs might not openly accept it but introduction of iTunes Ping and Game Center clearly imply that Apple considers Windows Phone 7 as competition. Microsoft, you’re back in the game.

Read next: Hey CNN, I think your share count is a bit inflated...