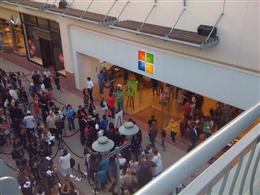 So far Microsoft seems to be making all the right moves as Windows Phone 7 nears launch. From defining hardware to luring developers, Microsoft has put all its weight behind the platform. While the devices come from various manufacturers, this is very much a Microsoft phone.

The first iPhone launch initiated a new ritual that of people waiting in queues to buy the devices the day they were launched. Ever since, reputed Apple bloggers and enthusiasts have started using the queues as a barometer to measure the success of rival phones and take jabs at them. Something tells me that a computer manufacturer releasing one device compared to a phone manufacturer releasing several devices a year isn’t a fair comparison. Not sure how long the queues are when new Macs are released. But that’s for another blog post.

Queues for Windows Phone 7 will make for good headlines and quite a bit of positive PR for Microsoft. The only way this can happen is if Microsoft launches the handsets and not individual OEM partners. No matter how amazing the phone is, knowing that there are other hardware vendors there is a good chance that we won’t see queues if HTC or Samsung were to hold individual launch events. Brand loyalty or brand frustration is one reason and so is the eternal hope for a better gadget.

The way I envision the Windows Phone 7 launch to be:

I might be well off base but something tells me this could work. I’m no marketing professional or MBA grad though, just a consumer who’d stand in line if I knew all my options and have decided on what I’m going to buy before walking into the store. If you think of it, there’s no choice when it comes to the iPhone, everyone knows what they’ll get.

Read next: Sylvester Stallone is my hero. Listen to this...