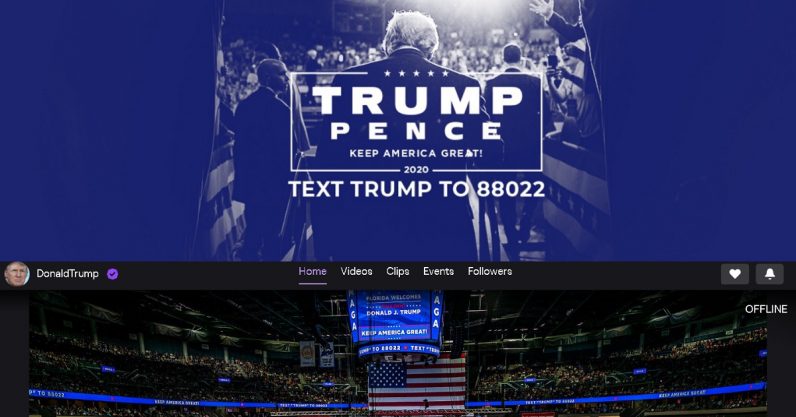 Just when I was afraid my week would pass me by without something odd happening, I discover Twitch’s latest streamer is none other than US President Donald Trump. And you’d better believe I followed his channel as soon as I saw it existed.

The channel’s been verified, so I gotta assume it was set up by someone from the President’s actual team. (I’ll keep saying “he’s streaming,” even though I’m pretty sure Trump is not handling the tech himself.) As yet, all he’s streamed is a rally in Minneapolis. His channel had only 135 followers last night, according to The Verge, but at the time of this writing it’s got almost 50,000.

I gotta admit, that piques my curiosity. It’d be like your most graceless family member entering a ballet competition — you have no idea what they’re doing there, and you feel like you need to keep an eye on them. So yeah, I followed the President on Twitch because I gotta see what he does with this.

I dare not surmise what political purpose a Twitch channel plays. Maybe it’s an attempt to harness the youthful demographic who’ve replaced most other forms of entertainment with game streaming? Good luck tearing those kids away from Fortnite streams long enough to pay attention.

Also, you may have heard this, but Trump has some animosity towards Amazon — or at least owner Jeff Bezos. He’s hardly alone in that, but I wonder if anyone told him Amazon literally owns Twitch. Then again, Bernie Sanders also has a history of publicly calling out the Big A and he’s also got a channel on Twitch, so I guess it’s not actually that big of a deal. One of Sanders’ staff members told The Verge it was to tap a “potentially supportive audience that we may not be hitting other ways,” which sounds like it supports the aforementioned Fortnite generation hypothesis.

So basically, it’s the How Do You Do, Fellow Kids meme. I’m cool with that.

That said, if you do go to Trump’s channel, I highly recommend keeping the chat turned off. I dipped in when the channel was offline and was treated to a cavalcade of spam — most of it not even relevant to the President’s politics. If there’s one thing more annoying than chat spam, it’s off-topic chat spam. I can only guess it’ll get worse once he’s online again.

If nothing else, it’s going to be incredibly bizarre to read the notification “DonaldTrump has started streaming.”

Read next: Why migrating to another planet is a stupid and implausible idea