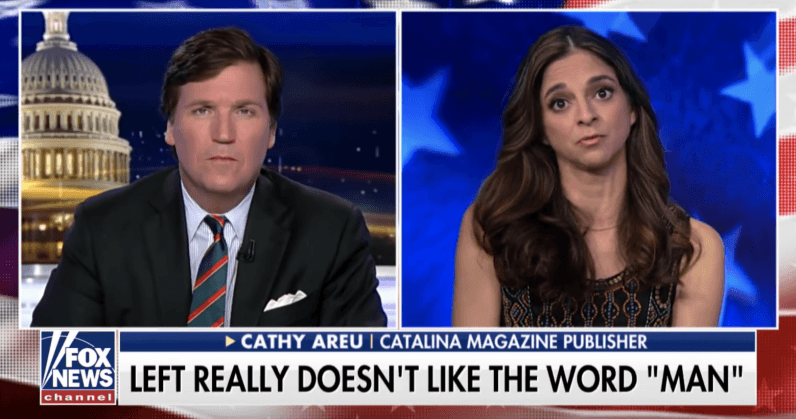 A recent Fox News video showed just how easy it is to spin the wheels on whatever apparatus it is that turns the outrage machine. Tucker Carlson last week aired a segment deriding “the liberal effort” to ban the word “man” on college campuses.

In just under a week, it’s been shared over 486,000 times and viewed by more than 42 million people. The outrage was real. The subject matter? Not so much.

Carlson didn’t lie, per se, but things got interesting when the network stripped the bit of context and slapped it on social media with the headline:

Liberals have found their new target. They want to remove all ‘MAN’ words.

For several minutes, Carlson and his guest Cathy Areu, founder of Catalina Magazine, held what appeared to be a mock debate featuring the smug and patronizing TV host, a man who operated in hypotheticals and condescension, like this gem: “What if you live in Manchester, Vermont?” And on the other, there was Areu, who was less offended liberal, and more SNL parody of one.

The segment centered around a Purdue writing guide’s suggestion that students use inclusive and neutral language in their work. Nowhere does it suggest banning words, or avoiding usage of “man,” in anywhere but its most dated usages.

“Mailman,” for example, should be “mail carrier,” as carriers are both male and female now. The guide is less a burning source of liberal outrage and more of a public manifesto on how not to be an asshole.

Incorrect: Although she was a blonde, Mary was still intelligent.

Painting this as a liberal issue, or an institutional one, is overlooking similar rules from guides that existed decades before Carlson’s segment. AP Stylebook, the Chicago Manual of Style, and the MLA Style Guide all have similar passages about how to use gender in writing. There isn’t a professional writer on the planet who hasn’t had to make decisions on how best to use gender in prose.

Carlson and his guest also ignored further context of the guide, which sought to neutralize gender in writing for both sexes, not just men. “Stewardess” and “Steward” for example, should be “flight attendant,” noting changes in the industry since the 60s when females were responsible for most in-flight care. Others seek to avoid additional wording, such as referring to a “male nurse” or a “female doctor” as “nurse” or “doctor,” respectively.

Of those that specifically mentioned the word man it offered other man words as substitutions. “Mankind,” for example, could be substituted to “humanity.” “Man’s achievements” might sound better as “human achievements.”

None of the real examples mesh well with Carlson’s spin on the story, but it didn’t matter. In mere hours conspiracy theorists like Alex Jones pounced on the opportunity to retell it, as did numerous fly-by-night conservative Facebook Pages — the same type used to create confusion during the 2016 election.

One part, however, I couldn’t help but chuckle at. Toward the end, Carlson says:

I guess the question for me is who gets to decide what changes and what doesn’t? So, for example, I think I’ve now decided the most offensive word in the language is ‘college professor,’ okay? Because to me that connotes dumbness, and misuse of power, and tenure, and mediocrity.

If that isn’t the pot calling the kettle black…

Read next: How to optimize your Medium as a freelance writer