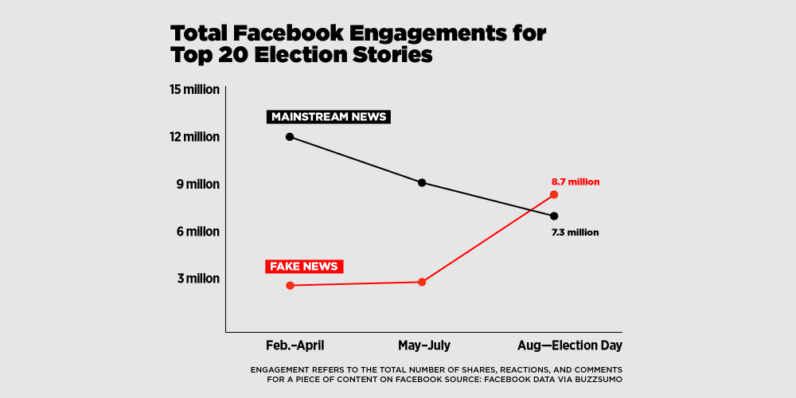 As the election season came to an end the fake news sources were just getting started. During the final three months of the US Presidential campaign, viral fake news sites crushed the real thing in terms of Facebook engagement.

According to reporting from BuzzFeed News, the 20 top-performing fake election stories — those coming from hoax sites and hyperpartisan blogs — generated more than 8.7-million engagements. That’s shares, reactions, and comments on Facebook, for those keeping score at home.

During the same period, the 20 best-performing election stories from legitimate media outlets saw only 7.3-million engagements.

The era of fake news is upon us. In fact, it’s not a stretch to say that trust in media being at an all-time low might point directly to the problem — not understanding which outlets are trustworthy. It’s easy to argue that cable news is crap; people can only handle so much news about Justin Bieber, Kim Kardashian, and cute cats playing the piano. Crap content, however, does not equal crap reporting. Arguing that the programming is awful is not the same thing as losing trust in an organization for running it.

CNN, MSNBC, and others have all slid into a dark void in terms of programming. Reporting, on the other hand, is something different entirely. Bad programing does not necessarily equal bad reporting.

It’s hard to argue in favor of cable news. The truth is, they’re all crap. What I can argue for are traditional news outlets like The New York Times, Washington Post, and others — all who provide great reporting. You don’t have to go the traditional route if you’re looking for great sound reporting, either — The Intercept and ProPublica are two of the very best when it comes to investigative work.

Hell, look no further than the team behind this report — BuzzFeed News. These guys and girls are legitimately great at what they do; just ignore the BuzzFeed moniker and stick to the ‘news’ section. Seriously, go read the full report, by Craig Silverman, right now and judge for yourself.

Facebook, whether Mark Zuckerberg wants to admit it or not, has a problem.

Four of the top 10 false news stories were published by a site that rose to fame due to a Facebook error — End the Fed. While Facebook isn’t running the site, or producing its content, it is responsible for its dramatic rise to power. It’s End the Fed, you might remember, that was responsible for the fake Megyn Kelly story that appeared in its Trending section.

Granted, the site was already seeing strong engagement numbers on the platform by posting stories of dubious factuality, like: ‘Obama Caught Sending Refugees Infected with TB to THESE 7 States!’ Strong engagement numbers presumably led to increased trust for the site and thus a coveted spot in the Trending section — which then made the page explode in popularity. End the Fed is just one example. Here’s a Google Doc with dozens of others.

Oh, did I mention the website ‘endthefed.com’ was only registered in March? That’s right, a site that’s less than a year old is demolishing two long-standing icons in print journalism. Tell us again how Facebook doesn’t have a fake news problem, Zuck.

Read next: Tesla speeds up its electric cars with just a software update