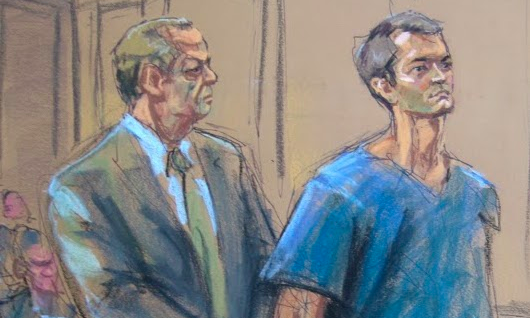 I’m on the phone with Bill from ‘Bill & Ted’s Excellent Adventure’ and ‘Bill & Ted’s Bogus Journey’. That’s the thought that kept leaping through my mind as I spoke to Alex Winter.

Despite being very aware of his excellent work writing and directing documentaries – ‘Downloaded’, which told the story of Napster, and ‘The Deep Web’, which premieres on Epix on May 31 – along with features, TV shows and commercials, my childhood love of those movies was hard to ignore.

But in a way, it was quite appropriate to get caught up with an assumed identity, as we were on the line to talk about ‘The Deep Web’, a film that has another man taking on a character at its heart.

In this case, it’s Ross Ulbricht, the 30-year-old who was convicted in February of being ‘The Dread Pirate Roberts’, the creator and owner of the Silk Road, the most famous and notorious dark web marketplace. He will be sentenced today.

‘The Deep Web’ tells a much broader story – Winter talks to many of the architects of the hidden Web, explores the impact of Bitcoin and goes far beyond the implications of a single dark net forum – but there’s no doubt that Ulbricht is at the heart of the action.

Winter says he corresponded with people using encrypted email since the late ’80s and his work on ‘Downloaded’ helped him further establish his credibility with contacts in that world.

In some senses, the film, which chronicled the rise and fall of Napster, was like the first chapter of a story that continues in ‘The Deep Web’. He explains:

The Silk Road was the next big watershed in technology after Napster. It was the first time people could go online and buy almost anything with a currency they could use anonymously.

His passion to make the documentary was stoked by a sense that the story was being told clumsily in the media:

I was interested in watching The Silk Road and the rise of Bitcoin. Just like with Napster, it began as a centralized server and has now spawned many decentralized copycats. When Ross was arrested, I saw how the media was responding in this black and white, quasi-ignorant way.

I asked him to expand on that:

There’s a combination of ignorance and hostility towards technology. That comes from fear. It’s forcing people to make changes. They have to make them. They have no choice. I also think it makes for good headlines to be as salacious as possible.

What this film is saying is – regardless of the moralizing, this story raises significant questions about the drug laws and technology’s ability to change the world. It raises questions about government overreach in the digital age. We still don’t have an answer that’s acceptable about how the Silk Road’s servers were found.

‘The Deep Web’ project kicked off with a Kickstarter campaign, but its intention was less to seek funding for the film (it had a modest $75,000 goal) and more to send up a flare about what Winter was working on:

It took time to gain trust and some people came to us when they knew what we were working on. Our primary motive for doing the Kickstarter was to create a community around the movie and plant a flag in the sand.

One constant message Winter received from the sources that came forward is that ‘The Dread Pirate Roberts’ was not Ulbricht alone:

All the investigations I did within the Silk Road. These were people who don’t know each other… They all said to me that there were three or four Dread Pirate Roberts. This was separate sources, on at least 8 different occasions.

People have asked for my opinion over and over again. I’m loathe to fall into the trap of being frustrated by uncertainties. My opinion is irrelevant.

It’s human nature to want hard answers. The film is explicitly exploring mysteries where there are none. There is a trend in documentary to be very editorial – spending two hours proving why it’s X – I come from the opposite direction. I don’t know and when it’s over, I’m still not going to know.

I think that’s honest. It allows the audience to formulate their own opinions. If you give a concrete answer – say ‘Ross is a hero’ or ‘Ross is a vile drug dealer’, either one of those leaves a lot out of the story.

While Ulbricht’s legal situation made it impossible to speak to him directly, his family was closely involved in the production:

I was able to interview him through his parents. He was not in a legal position to be interviewed by me, ’60 Minutes’ or anybody else. It was the prison and the legal system preventing me from getting a filmed interview with him.

I was only able to get questions answered by his parents, and they were very general. Most of the issues about what I could or couldn’t get from Ross were to do with the legal system. That being said, I know him as little as anybody else. I never wanted to try and unravel the onion layers around Ross.

That makes for a more challenging and worthwhile watch. For viewers outside the US, Winter promises the film with be coming soon to other platforms including iTunes and, potentially, Netflix.


And for fans of ‘Bill & Ted’ there’s another reason to catch the documentary:

It sees Winter and Keanu Reeves reunited professionally for the first time in 22 years, with the latter providing the narration for the film.

Reeves says of the project:

I’m honored to be working with Alex Winter on this timely and vital documentary. The Silk Road and trial of Ross Ulbricht involve many important and complex issues that impact the life of Mr. Ulbricht and us all.

It won’t be the last time the pair work together. ‘Bill & Ted 3’ is still making its way through the development process, but looks on course to become a reality.

I couldn’t end the interview without asking Winter about that project, or more specifically, what it’s like to still be Bill 26 years after the first film:

I don’t mind people asking me about ‘Bill & Ted’. It’s been such a basic part of my life. I’m now at a point where I’ve spent more time dealing with it than not. I have no issue with it – that’s why we started putting another one together.

It’s exciting to come back to the characters. The fun thing about them is that they’re ageless. You play them in terms of who they are spiritually. Their mannerism and physicality are not tied to age. We played them like 9-year-old kids. They still have that quality. The comic potential of that becomes even better as it becomes more discordant. It will be funnier because they’re older.

In the meantime, watch ‘The Deep Web’, it’s a lot more important than our nostalgia for two very funny movies and desire to see a third.

Read next: Get ready for a career as a developer, with the Interactive Coding Bootcamp