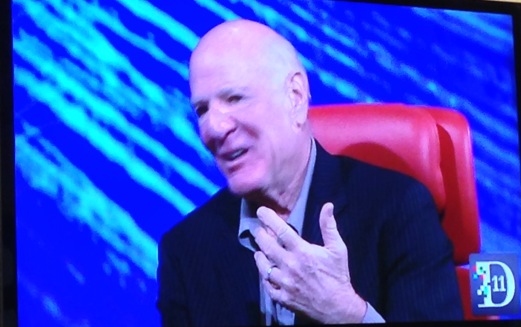 Today at the All Things D: 11 conference, Chariman of IAC and Expedia Barry Diller and CNN Worldwide president Jeff Zucker talked to Walt Mossberg about the future of television.

Mossberg kicked off the discussion by asking diller about ‘charging for something that’s free’.

“I don’t want to beat up the broadcasters,” said Diller, “I want to move things from closed systems to Internet systems.” Those theoretically open systems would presumably include the internet and wireless networks, over which Aereo’s small antenna’s broadcast their repatriated TV signals.

“Any incumbent wants to guard their wall as aggressively as they can,” said Diller about the resistance that Aereo has been facing from traditional broadcast. “I’m kind of happy they sued us in a noisy way because it’s helping Aereo get known.”

But, when asked frankly about customers, Diller acknowledged that “we have very few.”

Aereo is set to spread out to 22 cities in the next few months, and Diller says ‘it’s just beginning’.

“If it works, and it gets a reasonable amount…15-20 million homes, we’ll have a billing relationship with them and we’ll be able to generate our own programming,” said Diller. Original programming has become a major theme, with Amazon, Netflix and Hulu all working their way out from re-broadcasting to bespoke shows.

Diller says that Aereo isn’t pulling money out of broadcasters’ pockets because a larger audience will equate to more reach for TV advertisers, which is where their revenue comes from.

“I can’t imagine any of you enjoy the navigation system of cable, if you do you don’t belong at this conference,” says Diller. “If you do…you’re downright stupid.”

Diller pointed to Apple and Amazon as the prime contenders to change the way that we watch TV in a meaningful way. If Apple can develop a product that works well, Diller says, there is real chance for success.

“Microsoft’s Xbox is a fantastic device…they are going to drive programming through it, and they’re going to drive this centricity,” added Diller, acknowledging that the company shouldn’t be ignored in the ‘future of television’s’ Internet centric modality.

Read next: Google launches Android app for Google Apps administrators to help with user and group management on the go