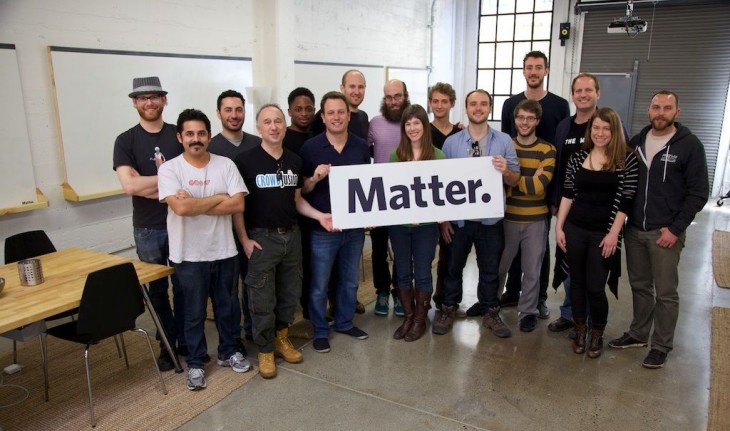 It was back in December when we first introduced Matter, San Francisco’s accelerator specifically for media startups. And today it has announced the six digital startups that have been selected for its inaugural class.

Just to recap, Matter is backed by three media non-profits: San Francisco’s KQED and the Knight Foundation, which have each ploughed $1.25 million into the starting $2.5 million fund in exchange for an equity stake in the startups, and Public Radio Exchange (PRX), which is providing strategic and management support.

Matter’s mission is to “fuse the values of public media with Silicon Valley entrepreneurship,” and its founders include former Apple engineers, digital video experts and other media veterans.

The six selected startups promise everything from “reimagining news discovery” and a crowd-powered investigative network, to deep video analytics, and interactive storytelling. And without further ado, here they are.

ChannelMeter is a video analytics platform for publishers and brands looking to maximize their engagement with audiences through online video.

OpenWatch says it’s an investigative network for “creating a just society” through radical transparency. It’s a global participatory counter-surveillance project which uses smartphones to monitor authority figures, such as the police.

SpokenLayer brings human voice to the written Web – it serves up narrated audio, bringing written content direct to your headphones.

Station Creator is setting out its stall to democratize TV through a platform that lets anyone distribute their own 24-hour broadcast station online. You can essentially create your own online TV station.

Zeega says it wants to revolutionize Web publishing and interactive-storytelling for a future beyond blogs, letting you mix media from anywhere and share it across various digital networks.

Four months in the making

The four-month program launched on Feb. 25 and will culminate with a demo day on June 13, with each team receiving a $50,000 investment.

They will also work alongside each other in the Matter co-working space in the South Park area of San Francisco’s SoMa district. The program kicked off with an entrepreneurship bootcamp, which was followed by a series of design reviews, mentoring sessions and workshops.

There’s certainly a growing focus on encouraging innovation in digital media, and Matter hopes to help kickstart something too.

Read next: Remember to stay in touch with all of your best LinkedIn contacts by using FiveHundredPlus