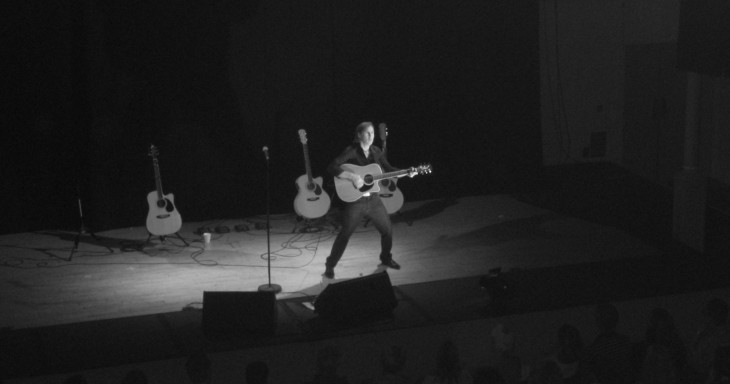 N0tice is one of the Guardian’s testbed projects, which we’ve previously noted has real potential to take news reporting, and news gathering, in new directions. After breaking cover last October, it finally left its closed beta phase in March this year, before introducing a series of new developments and updates with version 2.0 last month.

In a nutshell, N0tice is an online community noticeboard, upon which news, details of events, and local special offers can be posted for other users. And now the Guardian has partnered with marketing and technology agency LBi to launch a live-music mapping tool for the open community platform.

The tool appears on the Guardian’s music blog pages, as well as a dedicated N0tice portal, and displays fans’ tweeted insights, Instagram snaps and n0tice posts on a map, by location.

Users will, of course, have to enable location on their device, after which they tag their micro-reports with the #gdngig hashtag, and they are then pinned to a map of gigs across the UK and further afield.

You can click on any pin in any location, which will then take you to all reviews emanating from that area:

Click on a specific report, and you can see full details, including images.

While the Guardian is hosting the interactive map, LBi built the tool, devised the campaign creative, and the online advertising around the campaign.

In terms of how this fits in with the broader platform, well, bands and artists can list their gigs on N0tice and venues can post the events. Third-party developers can also reuse the Guardian live gig map code, or tap into the N0tice APIs directly, so there is potential here for some really neat apps built upon this. Naturally, it will depend on the uptake, and the more gig-goers the Guardian and LBi can get on board with this, the more powerful a tool it will be.

N0tice kicked off as a Guardian hack day project way back in 2009, which was subsequently incubated by Guardian Media Group, under Director of Digital Strategy Matt McAlister.

“N0tice is a unique project because it uses the power of social media to give a voice to people, events and news in a hyper-local context,” says McAlister. “With the live-music mapping tool, LBi has again provided us with some great thinking around what can be achieved with the n0tice platform.”