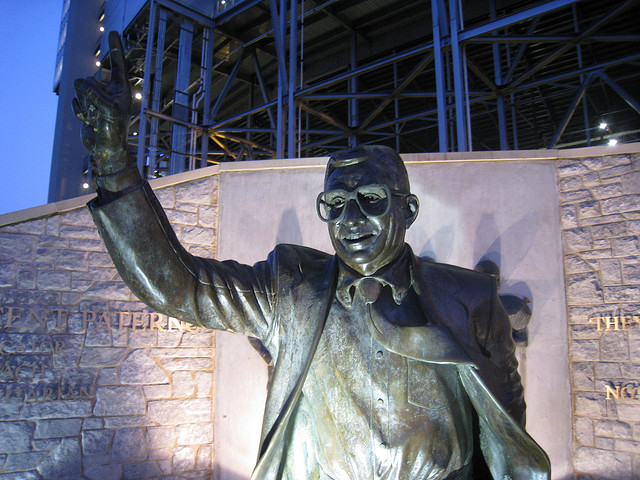 As you may remember, CBS Sports wrongly announced the death of the ex-Penn State American football coach Joe Paterno – who had recently been blamed for not doing enough to report child sex abuse.

As Paterno’s sons soon pointed out, the information was incorrect – although terminally ill, their father only passed away hours later.

Following the misstep, it emerged that Jacobi’s report was based on a sole source he initially didn’t bother to name: the Onward State. A local online news outlet run by students targeted at Penn State College community, it had erroneously reported JoPa’s death on Twitter.

This is how CBS ended up sharing the blame with Onward State’s managing editor Devon Edwards. According to Poynter, the student’s wrong information was itself based on a false email and other incorrect allegations.

Had Jacobi mentioned his source, he may had kept his job following public apologies. Instead, CBS seems to have hesitated for a few days before deciding to let him go. Jacobi had been working for CBS Sports for the past 17 months; according to his LinkedIn profile, his job title was College Football Blogger.

Jacobi himself insists he’s not bitter about CBS’ decision – not only with the above-mentioned apologetic messages, but also with this clarification an hour later:

Jacobi and Edwards know it too: source attribution and fact-checking are mandatory for quality reporting. These are two tasks anyone involved in print and news has to perform, no matter if they call themselves ‘journalist’ or ‘blogger’, ‘student’ or ‘senior’.

Still, some consider CBS’ decision to be harsh on Jacobi. Says US blogger Erik Wemple:

CBSSports.com could easily have kept Jacobi right where he was. Just issue a statement expressing commitment to further training and be done with the issue. But a firing sends a message that CBSSports.com cares more about its credibility than it does about one employee’s job security.

Not only does CBSSports.com put on notice its employees that multiple sourcing matters, it puts on notice the entire industry.

For journalists and bloggers alike, Jacobi’s sacking is certainly frightful: one article goes wrong, and we could lose our jobs. Yet, this whole debacle also serves as a reminder that we should always maintain our standards. Despite deadlines and newsroom pressure for scoops, let’s keep in mind the damage bad reporting can do.

Do you think CBS’ decision was fair?

Read next: Sean Parker says Facebook IPO could be 'the largest offering in history' [video]