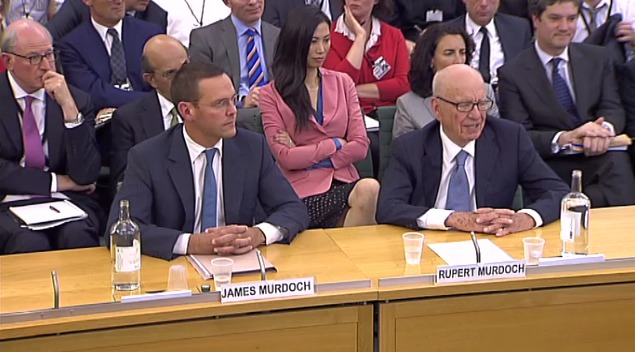 Rupert and James Murdoch faced the Culture, Media and Sport Committee today, and they were grilled by the MPs for two and a half hours, before it was delayed for 10 minutes by a man who threw shaving foam on Rupert Murdoch before being bundled out of the court room.

It’s thought that the man responsible was someone who calls himself Jonnie Marbles – an activist and comedian, among other things – who tweeted shortly before the attack:

The Murdochs, wearing dark suits, asked for permission to make an opening statement just after 2.30pm. John Whittingdale, the Committee Chairman, refused saying they could do so after the hearing. Despite this, Rupert interrupted his son to say: “This is the most humble day of my life.”

A tale of two stories

Throughout the interrogation, it was a tale of two stories for the father and son News Corporation team. At 80 year old, Rupert seemed old, tired and frail, and it seemed he had difficulty recalling many of the finer details. Indeed, he seemed not to be aware of some senior members at The News of the World, such as Alex Marunchak, who worked at the title for 25 years.

Furthermore, Rupert Murdoch had never heard of chief reporter Neville Thurlbeck, who wasn’t dismissed after he had been found guilty of blackmail. That in itself wasn’t strange given that Rupert does run a very large company, but he didn’t seem aware of the blackmail case at all. Tom Watson MP stated at one point that what Rupert Murdoch didn’t know “is revealing in itself.”

By contrast, his son James was very clear in his answers, though naturally many of them sounded rehearsed and were often non-specific. James attempted to answer a lot of the questions that his father struggled with, but the committee was committed to teasing answers from Rupert where they could.

A key point to emerge from the hearing, was that Rupert Murdoch denied overall responsibility for the telephone hacking, stating that he felt the responsibility lay directly with other senior managers and those directly involved in reporting the stories in question.

When pushed on his direct knowledge of what was going on at News International publications,  Rupert Murdoch said: “sometimes I would ring the News of The World Editor on a Saturday night.” He continued, “I did speak to the Editor at Sunday Times every Saturday.”

During this encounter, Piers Morgan tweeted this, stating that Murdoch took very little interest in the stories:

The overall feeling from the encounter was that Rupert Murdoch didn’t have a great deal of direct contact with his News International publications on a regular basis. Asked about his feelings on Rebecca Brooks, and why he had defended her so fervently, he said: “I believed her, I trusted her and I still trust in her.” James Murdoch also reiterated that he had no knowledge that Rebekah Brooks involvement with the phone hacking, though didn’t express the same passion in his defense of Brooks.

Was the News of the World offered up as a sacrifice to save Rebecca Brooks? “The two decisions are totally unrelated”, said Rupert Murdoch. And the only reason they closed the paper was because they had “violated the trust of our readers.”

Rupert Murdoch claimed to work a 10 or 12 hour day, stating: “I cannot tell you the multitude of issues I handle”, before suggesting that the News of the World was just a small piece of his news empire – 1%, he claimed whilst tapping his desk repeatedly. Later in proceedings, James Murdoch reiterated this with his own involvement with the publication, saying “I was never intimately involved with the workings of the News of the World”.

When asked when he became aware that criminality was “endemic” at the News of the World, Rupert Murdoch didn’t seem too happy with that word, but did say he was “shocked” and “appalled” in particular by the Millie Dowler hacking allegations.

In an attempt to soften the public’s opinion of him, Rupert Murdoch noted that the UK has a great competitive press and a transparent society, something he felt would be eradicated if news reporting was more heavily regulated.

In terms of whether we can expect to see another  Sunday tabloid newspaper from News International any time soon, James Murdoch said there were no plans in place to have this any time soon. But it was certainly alluded to that this will be an option when – or if – the dust ever settles on this case.

Could this have been James’s day to demonstrate he’s fit to take over his father’s company? Perhaps, but it seems that Rupert Murdoch is determined to stay at the helm of the empire he’s built up over many decades.

When asked whether he would be next to resign, Rupert Murdoch was very adamant that he would stay on and take the company forward:

“People I trusted let me down. I think they behaved disgracefully. They let me and the company down, I’m the best person to lead the company forward.”

Without wishing to take too much of what the Murdoch’s said at face value, there did seem like a genuine lack of attachment to the News of the World and News International in general. However, a key question was asked by the interrogating committee, relating to ‘willful blindness’, a term that emerged from the Enron scandal. The insinuation being that they chose to have no knowledge of what was going on at News International, so long as they were getting the exclusives.

Was team Murdoch’s performance rehearsed and was Rupert attempting to play the ‘old man’ card to get people on-side? It’s really hard to say – he didn’t seem like the powerful mogul he’s portrayed elsewhere across the media. But if he’s genuinely that frail, then that surely asks the question as to whether he should be head of such a big, influential, global media powerhouse.

If the fallout from the whole News International fiasco ever subsides, and evidence isn’t shown of similar activity elsewhere across News Corporation, then News Corporation and News International may well recover from this. And with the attack by a member of the audience on Rupert Murdoch, this could actually have the opposite of the intended effect. A frail old man attacked in front of the cameras could just gain him some sympathy.

Meanwhile, here is the full closing statement, as read out by Rupert Murdoch which he hadn’t been able to read out at the start:

“My son and I have come here with great respect for all of you, for Parliament and for the people of Britain whom you represent.

This is the most humble day of my career.

After all that has happened, I know we need to be here today.

Before going further, James and I would like to say how sorry we are for what has happened – especially with regard to listening to the voicemail of victims of crime.

My company has 52,000 employees. I have led it for 57 years and I have made my share of mistakes. I have lived in many countries, employed thousands of honest and hardworking journalists, owned nearly 200 newspapers and followed countless stories about people and families around the world.

At no time do I remember being as sickened as when I heard what the Dowler family had to endure – nor do I recall being as angry as when I was told that the News of the World could have compounded their distress. I want to thank the Dowlers for graciously giving me the opportunity to apologise in person.

I would like all the victims of phone hacking to know how completely and deeply sorry I am. Apologizing cannot take back what has happened. Still, I want them to know the depth of my regret for the horrible invasions into their lives.

I fully understand their ire. And I intend to work tirelessly to merit their forgiveness.

I understand our responsibility to cooperate with today’s session as well as with future inquiries. We will respond to your questions to the best of our ability and follow up if we are not capable of answering anything today. Please remember that some facts and information are still being uncovered.

We now know that things went badly wrong at the News of the World. For a newspaper that held others to account, it failed when it came to itself. The behavior that occurred went against everything that I stand for. It not only betrayed our readers and me, but also the many thousands of magnificent professionals in our other divisions around the world.

So, let me be clear in saying: invading people’s privacy by listening to their voicemail is wrong. Paying police officers for information is wrong. They are inconsistent with our codes of conduct and neither has any place, in any part of the company I run.

But saying sorry is not enough. Things must be put right. No excuses. This is why News International is cooperating fully with the police whose job it is to see that justice is done. It is our duty not to prejudice the outcome of the legal process. I am sure the committee will understand this.

I wish we had managed to see and fully solve these problems earlier. When two men were sent to prison in 2007, I thought this matter had been settled. The police ended their investigations and I was told that News International conducted an internal review. I am confident that when James later rejoined News Corporation he thought the case was closed too. These are subjects you will no doubt wish to explore today.

This country has given me, our companies and our employees many opportunities. I am grateful for them. I hope our contribution to Britain will one day also be recognised.

Above all, I hope that, through the process that is beginning with your questions today, we will come to understand the wrongs of the past, prevent them from happening again and, in the years ahead, restore the nation’s trust in our company and in all British journalism.

I am committed to doing everything in my power to make this happen. Thank you. We are happy to answer your questions.”